The work children did at the New York African Free School (NYAFS) would be much like the work the delegates would do at the Colored Conventions: negotiating with, and ultimately extricating themselves from, the controlling tutelage of white abolitionists who were convinced they knew what was best. Young Black men and women at the New York African Free Schools spent their days learning how to organize their time, how to hone their rhetoric, and how to “speak pieces” that would have maximum effect on both the white supporters and the Black community that would come out on Examination Days to see the children showcase their talents. As with the Colored Conventions’ proceedings, the speeches of the children were circulated in both the white and Black press, to be discussed and debated in homes across the region.

Women were particularly important in creating the conditions that would help NYFAS students to learn and grow into future leaders. That training in leadership was enabled in no small part by the work of the larger community, particularly the women who, as part of the Dorcas Society, made sure that the children had the clothing they needed to get to school in the first place. In 1833, Black households, many of them headed by women, boycotted the school to replace white teachers who advocated African colonization with Black teachers from the community. Those parents won the day, setting an example their sons and daughters would follow in their neighborhoods, at the Colored Conventions, and throughout the nation. 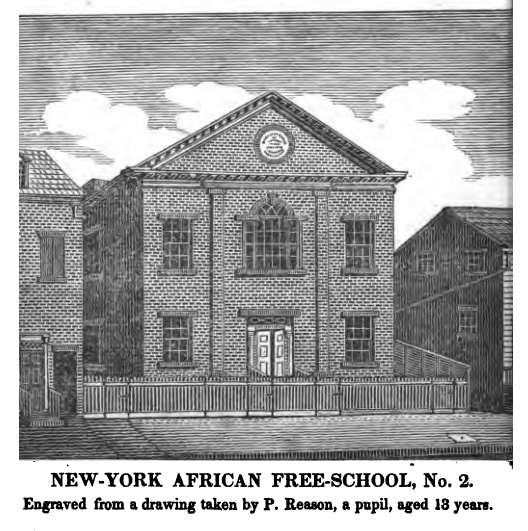 Front pages of the book The History of the New-York African Free Schools, From Their Establishment to the Present Time; Embracing a Period of More Than Forty Years (1830). Courtesy of the Archive.org.