In addition to the emphasis of educating Black children in preparation to become productive members of society, many Black parents and leaders saw education as a platform for combating white stereotypes of Black inferiority. As early as the late 1820s, minstrel shows had become popular in many New York theaters, portraying Blacks as ignorant buffoons. As a result, for these young Black students, education carried the burden of proving Black potential. By taking the stage during the New York African Free Schools (NYAFS) Examination Days, students demonstrated their intellectual abilities to peers and parents as well as to the Black and white communities at large, developing skills of language, speech, and performance that many would use later as delegates.

NYAFS records reveal that performance functioned as a source of power as students were taught how to “modulate pitch, emphasis, and gestures to help convey the proper meaning of the text and to demonstrate the speaker’s sincerity”. Used within the NYAFS curriculum, Caleb Bingham’s The American Preceptor (1794) highlights the educational value placed upon performative speech. Described as a selection of “Lessons for Reading and Speaking Designed for the Use of Schools” (emphasis added), The American Preceptor highlights the importance of performance by pairing pieces of prose and poetry with performative instructions. As apparent in the story of the “History of the Orator Demosthenes”, shown at the right, the ability to speak respectably and effectively convey oneself to the audience served as a source of power and recognition. 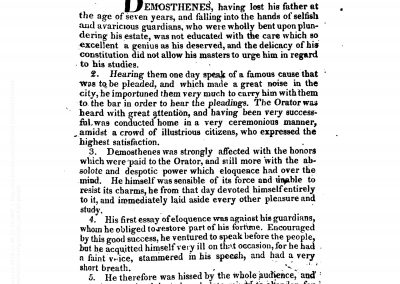 History of the Orator Demosthenes

“History of the Orator Demosthenes.” The American Preceptor. Edited by Caleb Bingham, Oliver Farnsworth & Co, 1825. For a complete version of the story, please visit our Virtual Library. 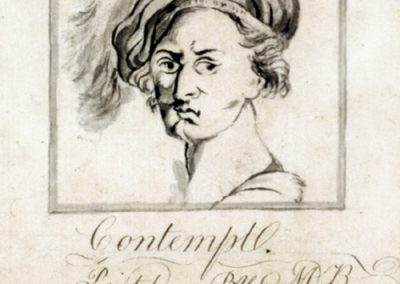 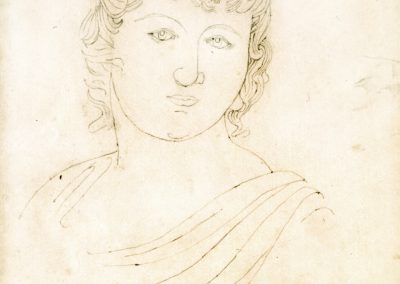 The educational emphasis placed upon performance is apparent throughout much of the Examination Day materials both in the performed pieces as well as the student work on display. Drawings such as “Contempt” by M. Burns in 1812 and “Innocence” by Thomas Lattin in 1826, illustrate the attention to the physical language of the body as instructors taught students to recognize distinct expressions of emotion and mood. Students were not simply taught to read and write but, rather, were instructed to embody the emotion, mood, and subjectivity of the position they were inhabiting.

The significance of this embodiment becomes particularly apparent in several of the speeches performed during the Examination Days. In a valedictory address “spoken by a female pupil” on April 18, 1882, the speaker explicitly emphasized the ability and intellect of Black students:

I need only point you to these specimens, and remind you of those exercises this day exhibited before, to demonstrate a truth, which must, at no distant period find its way to the breasts of the now most incredulous; viz. That the African race, though by too many of their fellow men, have long been, and still are, held in a state the most degrading to humanity, are nevertheless endowed by the same Almighty Power that made us all, with intellectual capacities, not inferior to any people on earth.

This performance of Black ability, highlighting the “intellectual capacities” “endowed by the same Almighty Power” was accompanied by the embodiment a specific cultural position as the speaker parallels her experience with that of slavery. Noting her brother, John, in the audience, the speaker proclaimed:

O, if I were called to part with you, as some poor girls have to part with their equally dear kindred, and each of us, like them, were to be forcibly dragged away into wretched slaver, never to see each other again.

The speeches performed by these students represent a carefully constructed balance of various cultural scripts simultaneously attempting to combat the stereotypes of Black ignorance while operating within the framework presented by white abolitionists—in this instance playing upon the sentimental framing of slavery. These performative skills, allowed the speaker to embody multiple positions and are reflected throughout the Colored Conventions, as delegates attempted to navigate the political landscape, speaking to members of the Black and white community, abolitionists and proslavery supporters.

Researched and written by Mariel Smith. Edited by Simone Austin

Duane, Anna Mae. “‘Like a Motherless Child’: Racial Education at the New York African Free School and in My Bondage and My Freedom.”