The 1855 National Convention of Free Colored Persons was notable for its dual emphasis on education and on the role of women. The 1855 Convention was the first national convention to list female delegates—though not the first to have female participants, speakers, or women in attendance. Further, this Convention recognized women as supporters for education and acknowledged the important work done by women for the elevation of the free Black population of the North.

Prior to 1855, there were several instances in the National Convention minutes that suggest that Black men, clergy, and the family were the key to educating Black youth and promoting social and moral reform in the community. However, to ignore the equally powerful influence of women’s community ties and networks of connection overlooks a great wealth of influence at women’s disposal, for as many researchers have discussed, women were indeed always already political in their work within and outside of the home. 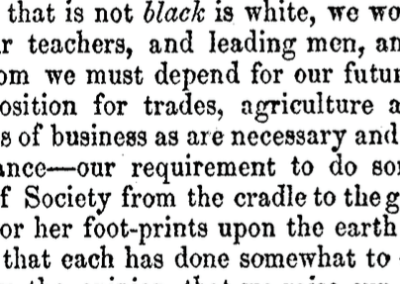 The 1855 National Convention minutes recognize the power of women to promote education for Black children. In a Report from the Committee on Mechanical Branches among the Colored People of the Free States we can see the emphasis placed on women as community actors. 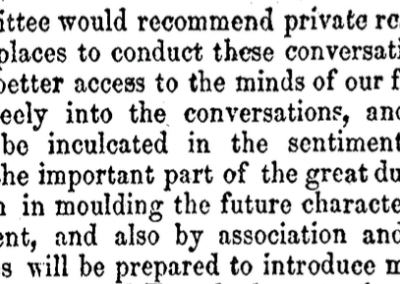 Another example from the same report recognizes the importance of women’s social reproduction in raising and educating children, as well as,, for the social and moral elevation of their race.

Significantly, the speakers of the 1855 National Convention issue a direct call to women as powerful and influential enough to act on behalf of their male brethren:

“Resolved, That we recommend to our mothers and sisters to use every honorable means to secure for their sons and brothers places of profit and trust in stores and other places of business, such as will throw a halo around this proscribed people, that shall in coming time reflect honor on those who have laid the corner stone to our platform of improvement.”

This resolution was yet another way that the 1855 National Convention testified to the importance of women’s political work and places women at the forefront of the conversation of improving the lives of free Black Americans.

By putting these calls to women as political agents in conversation with the discussions of racial futurity, the Convention minutes make a concerted effort to emphasize the importance of women’s influence over their families and recognize women as valuable members of the movement. Furthermore, these statements acknowledge the benevolence of women’s “great duties” which mold “the future character of our youth.” Delegates’ wives were often involved in women’s groups that supported education and community charity, such as Charles B. Ray’s wife Henrietta D. Regulus Ray, who was one of the officers of the Dorcas Society and attended the New York African Free School. Additionally, as suggested in a previous page of this exhibit, women/mothers were supremely important in the running of the New York African Free School and were ultimately responsible for closing the school when the white headmaster, Charles C. Andrews, and school board were unresponsive to their demands.