The Lancasterian System at the New York African Free Schools stratified the school along the lines of merit. The NYAFS created opportunities to recognize students and their performance in the classroom, namely by rewarding students with the ability to govern and with paper tickets, which were used as currency at the school. James McCune Smith, NYAFS #2 alumnus and delegate to the convention, reflected that the school taught “boys and girls to look upward; to believe themselves capable of accomplishing as any others could, and to regard the higher walks of life within their reach” in spite of the inequalities that these students would face in the US at large. The NYAFS prepared students to confront these inequalities through their professional work. Many alumni went on to be teachers, religious leaders, and Colored Convention delegates. 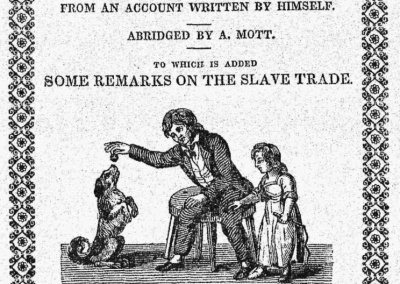 Abigail Mott’s edition of The Life and Adventures of Olaudah Equiano (1829) was one such prize that students could exchange tickets for. Browse the book in the public domain here.

Headmaster Charles C. Andrews instituted a Class of Merit for his most “advanced” and “distinguished” students at the NYAFS. One member of the Class wrote: “The qualifications of membership are, first, good character, and secondly, a progress in learning, satisfactory to the preceptor.” The class was a society akin to student government, a literary society, and a gentleman’s club. Members of the Class, who were distinguished by a silver medal around their necks, met once a month to elect officers, keep minutes, and admit new members.

The Class distinguished itself not only by excelling in academics, but also as an example of outstanding character. Members practiced philanthropy, by using the tickets they earned through good grades and behavior to procure donations of books to the school library. Further, the Class was a social fellowship; it instituted a committee to ensure the welfare of its members and established alumni reunions. The Class encouraged its members to practice governance, fellowship, and philanthropy. These qualities also describe the ethos of the delegates at the conventions, many of whom had been in this Class of Merit or would have been familiar with its functions.

Another method that Andrews deployed at the NYAFS to recognize student work and performance was the Ticket System, a token economic system with printed tickets as its form of currency. In a skit performed at the school’s 1822 examination day, “good student” William Hill explained the Ticket System to “bad student” James McCune Smith:

Whenever a scholar distinguishes himself by orderly conduct, or by excelling in the performance of his exercises, he is noticed by his master, by the Tickets of Reward; but, when any of us misbehave, or come late to school, we are fined and have to pay back our tickets: if we have none to pay with, we are necessarily punished.

As Hill explained, the schoolmaster rewarded or fined students for their classroom behavior, and students could also win tickets at the school fair. According to Andrews, every three months the school held a fair where the best student work was on display. The top male and the top female student were each rewarded 50 tickets for their work. The ticket system, then, unlike the Class of Merit, recognized both male and female accomplishments. Students could exchange these tickets for small toys, cakes, and books.

Implicitly, the ticket system was meant to foster competition among the students, encouraging them to outperform one another academically. In doing so, it also fostered student leaders, some of whom, like Smith, later attended the conventions. Smith was among the delegates concerned with creating educational institutions for African Americans, which were predicated on the merit of African Americans both as scholars and as contributors to society at large. Formed in school environment where his work was validated and rewarded, Smith’s activism took shape around a belief in the merit of his peers, a belief that underwrote the ticket system at the NYAFS.

Lancaster, Joseph. The Lancasterian System of Education, with Improvements. Baltimore, 1821.