A New Model of Education

In his History of the New-York African Free-Schools, Charles C. Andrews claims that the NYAFS were the second schools in the United States to adopt the Lancasterian system of education. Also referred to as the Monitorial system, the Lancasterian system follows the instructional models laid out in extreme detail by Joseph Lancaster, a British-born educator. Lancaster began developing his system when he created a school for neighborhood children in his father’s home. Students attending the Lancasterian-informed NYAFS, many of whom would become delegates to the Colored Conventions, were participating in a global revolution in terms of access to education and for its ramifications to the long-standing teaching models used in schools.

Lancaster’s model was built to accommodate the education of a large number of students—often several hundred—by only one teacher. That one teacher would arrange students into classes grouped by ascending order of skill or knowledge (not necessarily, as is common in present practice, by age). This ordering created a hierarchy of pupils who advanced from class to class based on mastery of subject matter. More accomplished pupils were appointed to serve as “monitors,” or students who were entrusted to devote about a quarter of their own school day to keeping order or instructing students in lower levels. The system was implemented in schools for both boys and girls. For the many Black children attending the NYAFS, especially those who went on to highly visible careers in the public and political spheres, the opportunity to occupy positions of leadership and authority otherwise refused to them in antebellum New York would prove extremely formative. 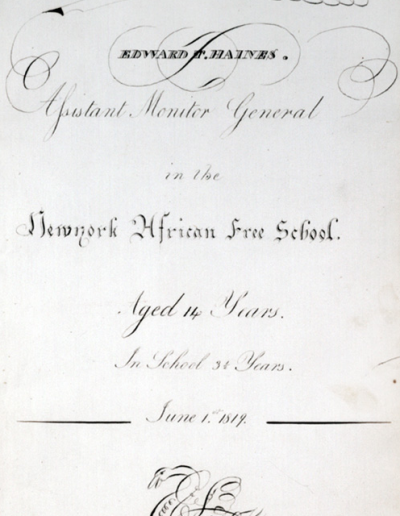 Image of signature flourish of Edward T. Haines, NYAFS student holding the title of Assistant Monitor General in the NYAFS. Collection of the New-York Historical Society.

Lancaster promoted his method based on its economic efficiency: “as scholars increase, the expense for each individual decreases, leaving one master competent to govern and teach many, instead of very few pupils, increasing his own salary, providing funds for rewards [to exemplary students], and yet on the whole saving a great expense.” As such, it was adopted globally—in Ireland, Spain, America, and India, for example—and especially in locales serving poor populations.

The system was not without its faults. Lancaster himself pointed out that its adoption by untrained or unfit teachers and poorly chosen monitors often resulted in deplorable school conditions, where students cowered and conformed rather than learned and achieved. French philosopher Michel Foucault discussed the Lancasterian System in relation to his concept of the Panopticon. Lancasterian schools were run with a rigidity predicated upon surveillance and conformity. Indeed, one of Lancaster’s innovations for girls learning needlework was to provide pupils with thread of a color contrasting that of the fabric upon which they practiced, so that the evenness of their stitches could be monitored and assessed quickly from across a crowded classroom. Patricia Crain emphasized the “acculturation and social control” enabled by a factory-like system that served colonial purposes. 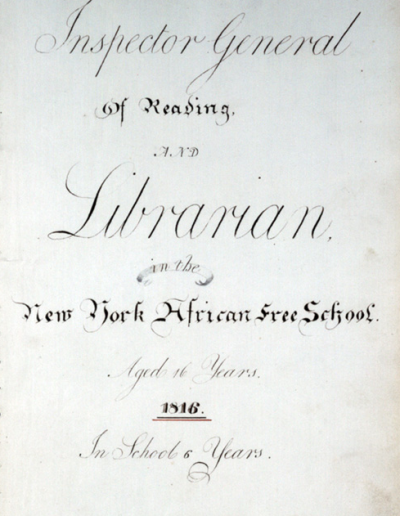 Image of signature flourish of John Burns, NYAFS student holding the title of Inspector General of Reading and Librarian in the NYAFS. Collection of the New-York Historical Society.

And yet students of the NYAFS such as James McCune Smith reflected fondly and respectfully on the time they spent within this system of education. McCune Smith noted that “the school-house, and school-boy days, settle the permanent characteristics, establish the level, gauge the relative, mental, and moral power of the man in after life,” and credited NYAFS with this positive foundational role in the lives of graduates such as himself and fellow classmate Henry Highland Garnet. Students at the NYAFS took pride in being appointed to monitorial status, as is evident in the many flourishes and embellishments some added to their titles—such as ”Inspector General of Reading” or “Assistant Monitor General”—on their schoolwork (see images to the left). Many monitors were also a part of what Charles C. Andrews dubbed “The Class of Merit,” a group of students selected for being “best behaved and most advanced in their learning,” and several graduates went on to become teachers themselves.

Students at the NYAFS, then, were both products of and participants in a regimented educational system, a system which, despite its clockwork school day and precise ticket system, provided significant opportunities for agency and power among Black children being rewarded for their learning and competing for leadership roles.