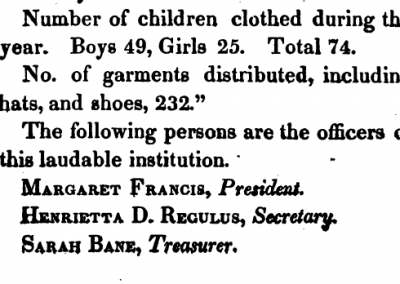 Margaret A. Francis was the first president of the African Dorcas Association (ADA), established in the winter of 1828. In the tradition of a “fragment society,” the ADA was a charitable women’s group with the dedicated purpose of creating, collecting, and mending clothing for students of the New York African Free Schools in order to promote attendance. The ADA was praised by writers in Freedom’s Journal and Charles C. Andrews in his History of the New-York African Free Schools. Indeed, the women of the ADA distributed 232 articles of clothing (including hats and shoes) to clothe 74 children during their first year of operation.

The 1830 U.S. Census lists Margaret A. Francis as the head of household, which included one free Black woman age 36-55 and a Black child under 10 housed on Greene Street in lower Manhattan. Two years earlier, Margaret is noted to have lived on Leonard Street. During this time, Leonard Street was also home to the Union Inn, boardinghouses for African Americans, a Zion Church, fellow ADA member Mary Seaman, and activists such as W.P. Johnson.

The ADA met every Wednesday afternoon at 2 o’clock, either at the Free School on Mulberry Street or at Margaret’s home on Leonard Street. The fact that Margaret was able to share her time and space with the ADA suggested economic comfort or support. She sewed alongside women and activists such as Henrietta D. Regulus Ray, who helped establish the New York Female Literary Society, and Violet Jackson, member of the Female Education Society.