DAUGHTERS AND GENTLEWOMEN: THE LATER GENERATION

Many of the daughters of convention delegates and attendees would go on to become prominent residents in Philadelphia. Among Sarah Mapps Douglass‘s friends were Ada Howell Hinton and Martina Dickerson. Frederick Hinton and Eliza Ann Howell’s daughter, Ada Howell Hinton, continued to fight for racial uplift. Both her father and grandfather were Colored Conventions delegates, and because she was raised by her maternal grandparents and her great aunt and uncle, the Gardiners, she was exposed to the Colored Conventions movement’s efforts.

Sarah Mapps Douglass, Ada Howell Hinton, and Martina Dickerson are part of the later generation that continued their parents’ activism and creativity. These elite Black women enjoyed the privilege of being born free and took every advantage of their education to foster an intellectual community. Ada H. Hinton founded a school in Philadelphia in 1849; at the time, Margaretta Forten and Sarah M. Douglass were also running schools.1

Martina Dickerson, Samuel Van Brackle’s stepdaughter, collaborated with Sarah Mapps Douglass, James Forten, John C. Bowers, Robert Douglass Jr., and others to create an album of poetry. Dickerson’s album is material evidence of her and her peers’ erudition. It is symbolic of their collective effort to assert their right to citizenship.

Below are pages from Martina Dickerson’s album. The flower paintings were created by Ada Howell Hinton and Sarah Mapps Douglass. Robert Douglass created the painting on the last page. Images courtesy of the Library Company of Philadelphia.

Charline Jao, who does research on nineteenth-century print culture, has provided her insights on these works. Read below: 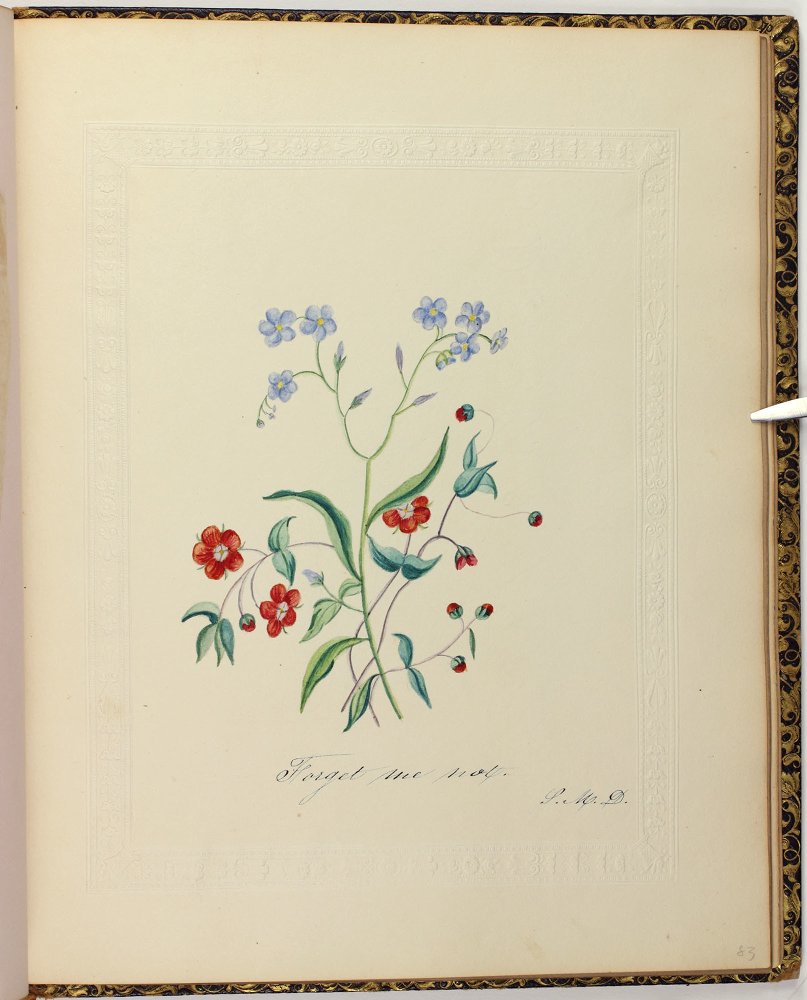 Sarah Mapps Douglass, “Forget me not,” Watercolor, ca. 1843, The Library Company of Philadelphia.

Sarah Mapps Douglass contributed a number of floral illustrations to her friends and students’ albums as the headmaster of the Philadelphia Female Anti-Slavery Society school. Douglass’s illustrations combine artistic appreciation, emotional connection, and scientific observation reflective of an interest in horticulture—all key aspects of her efforts to educate and uplift young Black women. Illustrations such as this one modeled both artistic technique and sentimental feeling for the recipient. 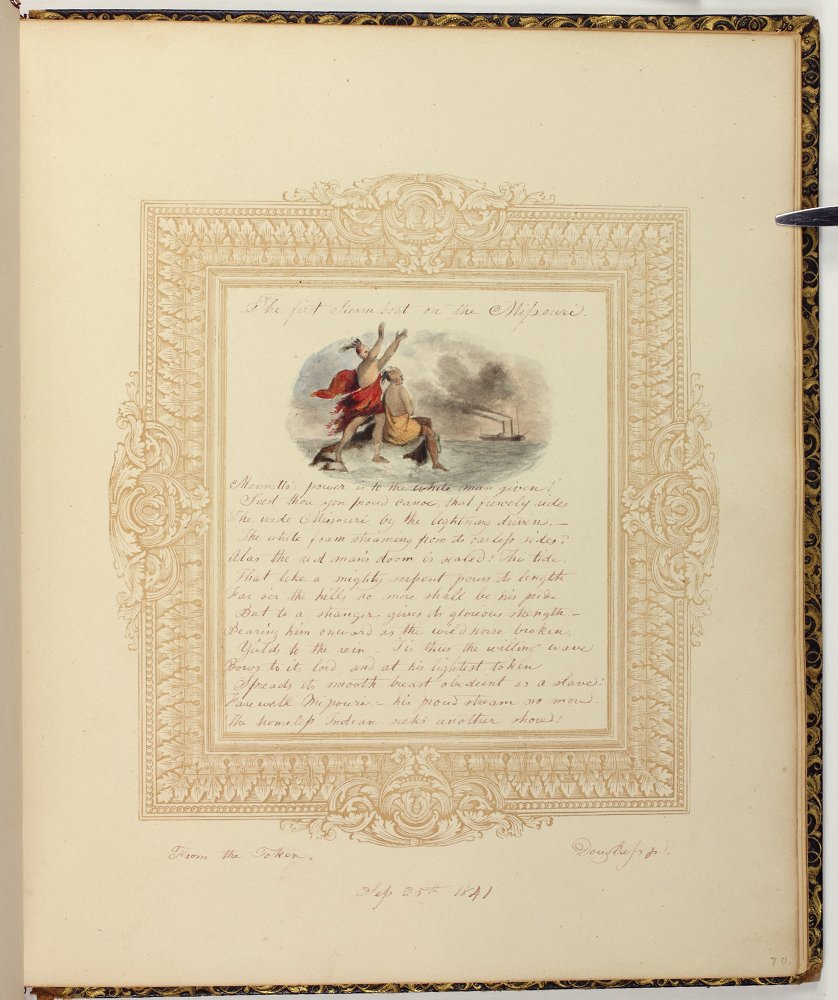 Robert Douglass, “The first steamboat on the Missouri,” Pen and ink, September 25, 1841, The Library Company of Philadelphia.

Robert Douglass produced this poem and illustration of two Native American men neatly into the album’s pre-printed borders. Taken from the gift book the Token and Atlantic Souvenir, this entry reflects the solidarity Douglass and other Black activists felt with Native Americans. Accompanying the illustration of a steamboat invading the Missouri waters, the poem ends with the lines, “Farewell Missouri: –his proud stream no more –/The homeless Indian seeks another shore!”  Through this transcription, Douglass critiques the violence inflicted on Native populations, which, in turn, allowed Dickerson to share and circulate these values through album-keeping. 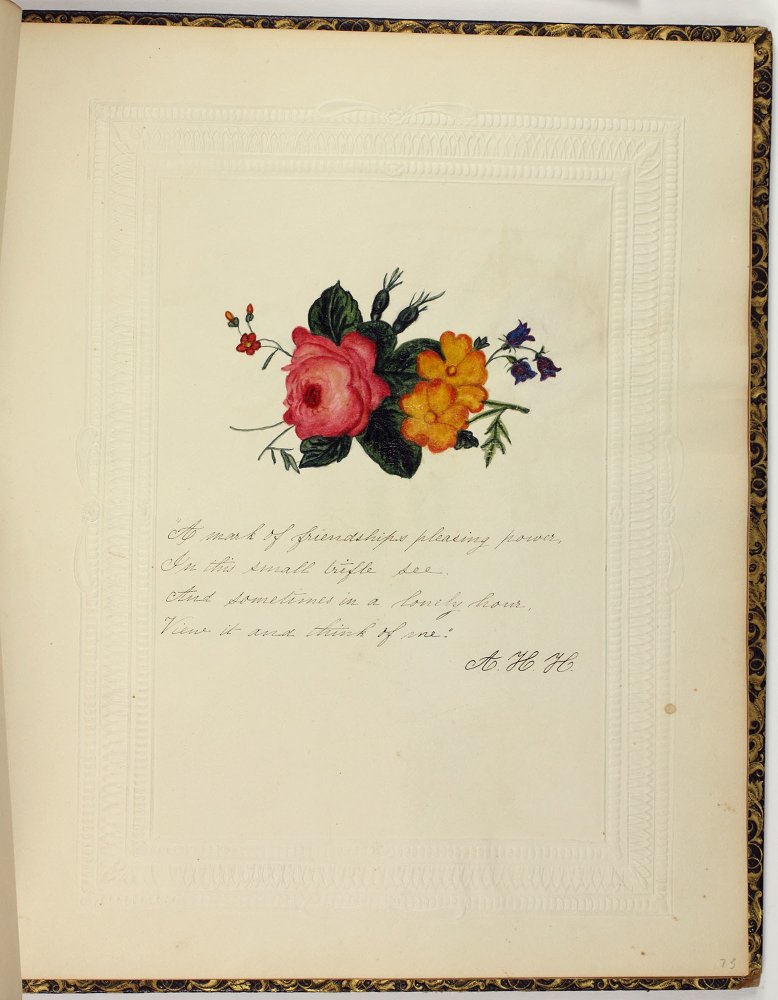 The four-line poem accompanying Hinton’s floral drawing reads, “A mark of friendship’s pleasing power,/In this small trifle see/And sometimes in a lonely hour,/View it and think of me.” By putting proof of their friendship on the page, Hinton offers Dickerson comfort in future moments of loneliness. The neatness of both the drawing and writing reveal a strong understanding of the album genre’s conventions and Hinton’s work as an educator. Remembrance and commemoration were both popular themes in album writing; though the contribution is not dated, we might speculate that Hinton’s poem demonstrates a system of care and support in response to the death of Martina Dickerson’s son in 1851.