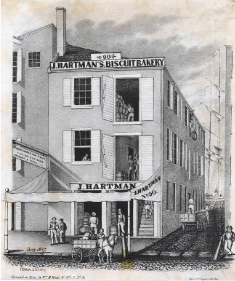 Jacob and Elizabeth Gilmore had been running a bakery since 1819 or perhaps even earlier. Their business was only a block away from Mother Bethel and Wesley Church. Like the Gardiners, Johnsons, and Shorts, Gilmore and his wife, Elizabeth, were acquainted with William Whipper and John C. Bowers, both of whom were active in the Colored Conventions movement. The Gillmores also sold tickets to both men’s venues. They were among the older residents who “saw in Philadelphia a city of refuge” and “applied themselves to establishing the social, religious, and political ligaments of community.”1

By the 1830s, the Gilmores were still running their bakery and were regarded as a very respectable couple. The Gilmores had a very well-defined presence in Black and white newspaper archives. Jacob and Elizabeth Gilmore gave bread and other surplus cakes to beggars, one of whom was a white Irish woman who entrusted the couple with her child. The Gilmores took in and raised the white girl, naming her Mary Gilmore. In 1834, Elizabeth Gilmore died. Notice of her death indicates that she was well liked and admired in the community.

Mary’s history remained unknown, which gave Robert Aitken, a slave owner from Baltimore, a chance to claim the young woman as the child of his mulatto slave. The preposterousness of Aitken’s claim over Mary Gilmore became clear to the court after a two-day trial, and Aitken left empty-handed. Gilmore’s respectability contributed much to getting his daughter back as his testimony was in stark contrast to that of the witnesses Aitken must have—and very likely—hired: one was a known thief and the other possessed, according to the newspaper reports, a questionable character. The story created a sensation. The Liberator reprinted the story from Pennsylvania Inquirer; both accounts speak favorably of the Gilmore family. False fugitive slave apprehensions was a looming threat for African Americans and, as the Gilmores’ case showed, even for individuals who had no known African heritage. In response to this injustice, African American communities came together. Newspapers reported that the courtroom was overcrowded and, later, that the false witness Aitken hired was almost attacked by African-American rioters in Wilmington for her conduct against the Gilmores.

Elizabeth and Jacob Gilmore in the Press 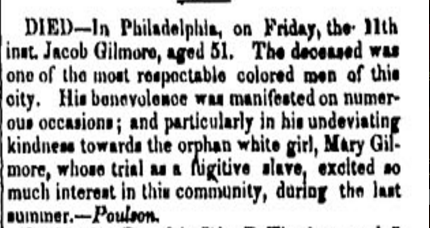