Serena and Peter Gardiner ran a boarding house on Elizabeth St. Although Peter supplemented their income by doing odd jobs (botanical doctor and boot cleaner), Serena appears to be entirely in charge of the house. This is not unusual; as Gary B. Nash points out, by 1820s and well into the1830s, “black households directed by women outstrip the number of female-headed white households.”1 Only Serena Gardiner’s name appears on their ads in Freedom’s Journal and The Liberator. 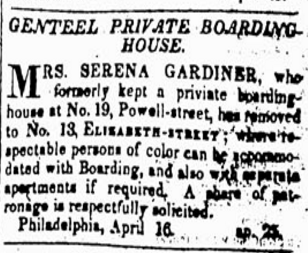 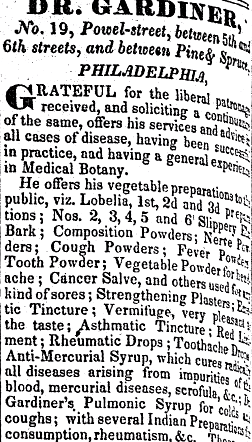 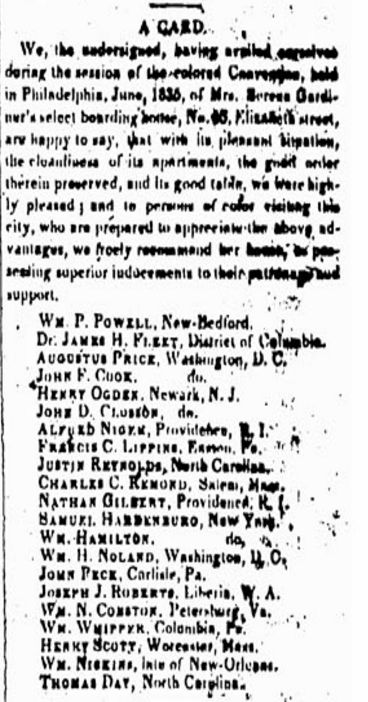 The Gardiners hosted many boarders and provided excellent service. In 1835, their boarders—mostly delegates from the Fifth Annual Convention—published a thank you note addressed to Serena Gardiner. Among those named was William Whipper, a well known activist and convention attendee. Peter Gardiner was not mentioned though he participated in many political meetings. His name appears in the minutes and proceedings of two Philadelphia conventions: the Constitution of the American Society of Free Persons held in 1830, the Third Annual Convention in 1833, and the Fourth Annual Convention for the Improvement of the Free People of Color in 1834. His political engagement pre-dates the Colored Conventions movement. In 1829, along with Whipper and Charles Short, he participated in the founding of the newspaper Rights of All. The Gardiners maintained an enduring friendship with Whipper throughout his residence in Philadelphia. The Gardiners were also connected to a prominent Black elite family, the Hintons. The Gardiners lived with Peter’s sister, Elizabeth Gardiner Howell, who was married to Richard Howell, an oysterman and a delegate at the 1830 Colored Convention. Both the Howells and Gardiners raised the Howells’ granddaughter Ada Howell Hinton when her parents died.2 Ada grew up to be an activist as well. This is not surprising as she grew up in a household that hosted many political discussions. By situating the Gardiner boarding house as an important place where African Americans lived, organized, and strategized, we gain a better understanding of the shape of Black activism in the nineteenth century.