WOMEN’S CONTRIBUTION TO THE PERIODICALS

Surrounding the emigration convention of 1854, Black women, whether in attendance or not, were actively contributing to periodicals. These women championed their dual roles as mothers and wives, but also recognized the power and influence of their political voices. Because of these women and their prolific contributions, antislavery voices and ideals of equality continuously disseminated among communities, even reaching places abroad. 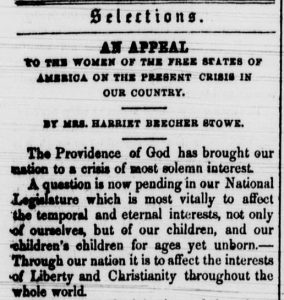 The March 25, 1854 edition of the Provincial Freeman included Harriet Beecher Stowe’s “An Appeal to the Women of the Free States.” She emphasized the importance of women and their roles within the newly free states. Stowe argued that women possess “a more immovable knowledge” and power of their own, which is incomparable to and “holier” than that of men. She furthered this point by noting how men too often may be blinded by “ambition and the love of political power.”

In response to the news article included on the right, a contributor to the same issue further described women’s empowerment noting what the New York Assembly has finalized:

“They assert that the education and elevation of women, are not the offspring of their legislation, but of civilization and Christianity…”

Such an influential change in government policy reflected the growing influence that Black women held, not only over their families and communities, but also over their entire race and the betterment of their own people. 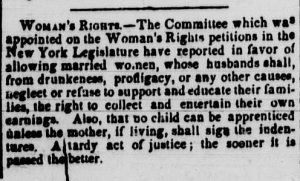 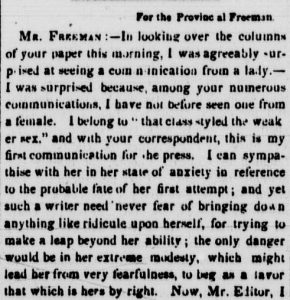 In another article, a woman named Dolly Bangs responded to an article written by a woman in Provincial Freeman. In this piece, Bangs said she is part of the “weaker sex,” yet a woman writer should never fear that her work will be ridiculed “for trying to make a leap.” In continuing her bold recognition of the significance of contributions from women, Bangs qualified her statements with the following:

“[I]f woman was only taught that her mental faculties are God-given, and are therefore to be used, – that no one has a right to hinder her from doing that which God has as manifestly commanded her to do, as if it had been written with his finger on tables of stone, by having given her the power to do, and the will to put that power into execution.”

With this conclusion, Bangs recognized the improving status of Black women in America during the year of 1854 and beyond. It is our job now, as readers and researchers, to give due credit to the women who—although not equally represented at the emigration convention of 1854—fervently expressed their opinions in the press.