WOMEN INSIDE (AND OUTSIDE) OF THE 1854 EMIGRATION CONVENTION 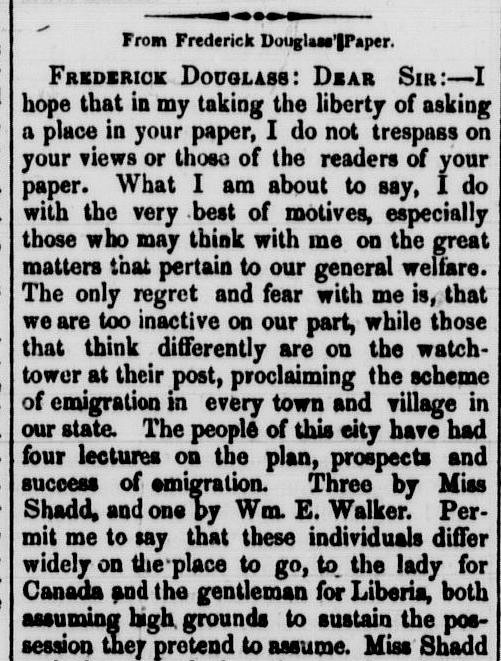 Before, during, and after the 1854 National Emigration Convention, several women were actively devoted to racial uplift. They spoke out, conveyed their ideas, and pooled resources for the movement. For instance, Mary Ann Shadd was instrumental to founding Provincial Freeman, proving to be an model example of just how influential and involved Black women were with the concerns of their communities.

The January 13, 1855 issue of Provincial Freeman, published nearly a year after the National Emigration Convention of ’54, reprinted a piece from Frederick Douglass’ Paper. In the article, a concerned citizen named D. Jenkins addressed the popular topic of emigration. Jenkins recognized women’s engagement in the emigration movement, especially those who were not in attendance at the Convention itself. It is noted in the article to the left that Shadd had arranged three lectures advocating for future emigrationist policies that would encourage a move to Canada. Jenkins noted of her,

“Ms. Shadd took the ground that the people of color reach every station in the government that is now held by any class of the people which she said could not be had in the United States any where, some of which was mentioned, such as justices of the peace, stations in the army, and such like; and the reason that more were not filled by men of color, was incapability. I must say it is a great pity that women are not admitted in the Assembly of the law-making power.”

In recognition of the power of the female voice, it is clear that Shadd—often recognized as the first known Black woman editor—understood the impact that she and other women held over the future of their nation and that of their race. Made evident by this article is the increasing reach of women, not only those who held positions inside of the ’54 Emigration Convention, but also those who remained outside of it. The fact that a reader of the Frederick Douglass’ Paper took the time to respond to her argument exemplifies how impactful the female voice was during this time. Thus, the conversation of emigration remained active and vibrant long after the ’54 Convention had ended. 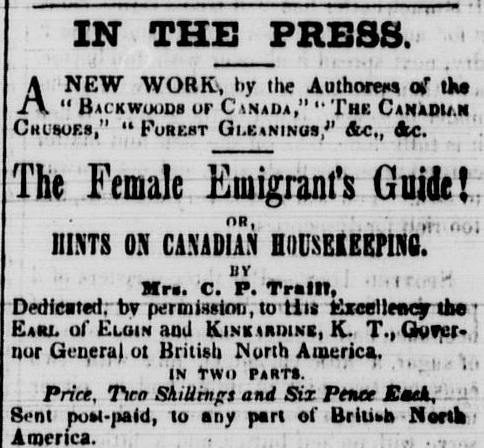 Here is another example of the attention given to women as related to the concerns of emigration. In this advertisement for a newly released guidebook called The Female Emigrant’s Guide, women are provided “hints on Canadian housekeeping,” which not only encouraged an emigrationist ideal, but also exemplified one role that women could play in the new colony: that of a housewife. This article is a window into conversations going on in 1854 leading up to and following the National Emigration Convention. Published in the Provinicial Freeman, this ad also emphasized the emigrationist desires of Mary Ann Shadd, who championed the idea of emigrating from the U.S. to Canada. This ad showed an encouraging voice for female readers who—as recognized by this very advertisement—played their own role in the possible future of emigration. 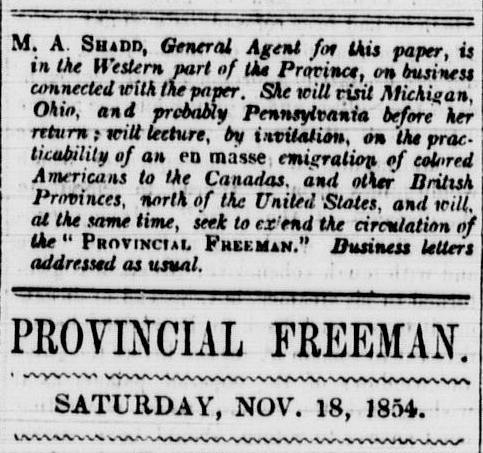 This news clipping in the Provincial Freeman announced the whereabouts of Mary Ann Shadd. In addition to detailing where she has gone, the note also evoked Shadd’s active emigrationist work. She used her own paper to promote the emigration movement.