TO STAY OR TO GO?: THE NATIONAL EMIGRATION CONVENTION OF 1854

DELANY’S ROLE IN THE CONVENTION

Martin Delany was active at the 1854 National Convention on Emigration. Not only was he the leader of the convention, but he was also a representative delegate from Pennsylvania, a member of the Committee on Permanent Officers, the Chair of the Business Committee, and a member of the Foreign Relations Committee. He even found time to help draft “The Political Destiny of the Colored Race on the American Continent”—a speech he delivered at the convention. As important and as telling as his involvement at the convention is, Delany’s contributions to the Provincial Freeman—a Toronto-based abolitionist paper—are also quite telling of his desire to promote emigration if slaves were not to be freed and rights for free African Americans could not be had in the United States. 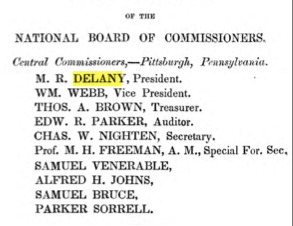 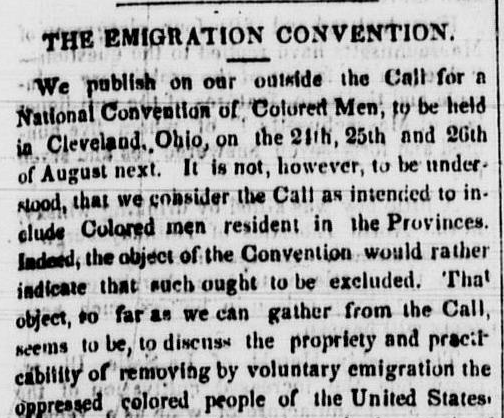 One such example of Delany’s contributions to the Provinical Freeman is found in the March 25, 1854 issue (five months before the convention)—the very same issue in which a call for the convention was published. In the issue, Martin Delany wrote a column titled “The Emigration Convention,” justifying the need for a convention on emigration, as well as, the need for African Americans to emigrate out of the United States. “We say to the slave,” wrote Delany as a voice of the convention, “You have a right to your freedom and to every other privilege connected with it, and if you cannot secure these in Virginia or Alabama, by all means make your escape…We say, further, to the free colored people of the States, wherever they may be, You are under no necessity or obligation to remain where you are.” Delany directed this statement to slaves in the southern United States as well as to free African Americans “wherever they may be.”

The power of print would not have been lost on Delany, as he ran The Mystery earlier in his life and edited the North Star with Frederick Douglass. Addressing a wide audience, he understood the scope newspapers like the Provincial Freeman had in reaching numerous individuals of varying literacy skills. He anticipated the newspaper will reach slaves in the South, as well as, free African Americans in unknown yet still oppressive locales. Emigration was important for Delany, and completely necessary in his opinion, since the United States would not outlaw slavery. Additionally, the Fugitive Slave Act of 1850 allowed Southerners and slave catchers to capture runaway slaves in the North and also kidnap free African Americans. In other words, Delany’s strong call for emigration was a response to the North’s inaction and to the tightened grip on African Americans.