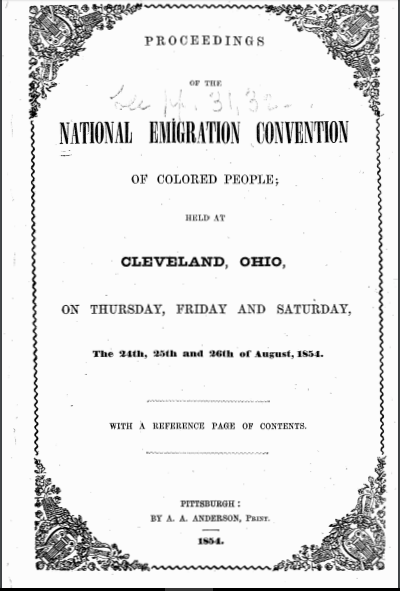 The National Emigration Convention of 1854 was held in Cleveland, Ohio, and focused on the topic of emigration: should Blacks leave the United States and go abroad in order to establish a safer, more functional community of their own? Or, should they remain in a nation that has endlessly oppressed them, while it also could hold the key to the success and solidification of their communities?

Delegates and attendees discussed and debated such questions during the convention, both during and beyond it. The Black press was a vehicle for articulating many angles of emigration discourse. Both well-known activists and anonymous subscribers penned articles and letters. Exemplary periodicals include, Provincial Freeman, Aliened American, and Frederick Douglass’ Paper. As a result of this inclusion, those who were not physically present at the gathering were provided textual resources that granted them partial access to convention debates. Ultimately, periodical content—such as advertisements, related articles, and sections of reprinted minutes—transformed newspapers into a voice of the 1854 emigration convention, one that allowed Black communities to engage with persevering and perpetuating voices that scholars study today.