TIMELINE OF RELATED EVENTS AND PERIODICALS

The timeline below shows newspapers and events related to the 1854 Emigration Convention in Cleveland, Ohio. Frederick Douglass’ Paper (previously the North Star) published an advertisement for the convention. Later, on April 15th, 1854, the Provincial Freeman published an article apologizing for publishing inaccurate information regarding the convention that they had reprinted from Frederick Douglass’ Paper. They claim that the correct statement and advertisement about the convention can be found in the paper Aliened American. Martin Delaney writes to Provincial Freeman to inform them of this mistake.

The 1850 Fugitive Slave Act is included on the timeline because it reignited support for the emigration movement. Previously, fugitive slaves looked and fled to the North, where they hoped to live with relative peace. But after the act is passed, fugitives, freedmen, and freemen faced the threat of being captured since the new law empowered individuals who sought to enslave men and women of African descent.

ADVERTISEMENTS IN THE PRESS

Click through the images below to explore ads for the 1854 Emigration Convention in various newspapers. 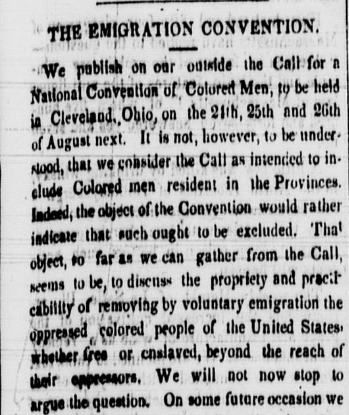 The Provincial Freeman published one of the first advertisements for the 1854 Emigration Convention on March 25th, 1854. It is important to note that although the Provincial Freeman put out this call, their Canadian readers were not invited to be delegates in the convention because the convention was for the emigration of those living in the USA. However, the article does note that Canadians may attend, but not as delegates. In addition, this first advertisement says that only five delegates from each state are allowed to attend. 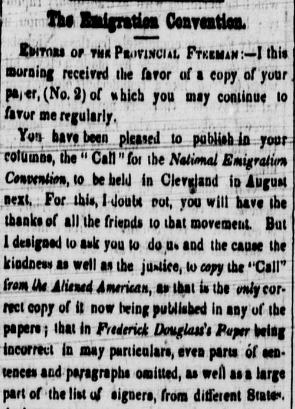 Additionally, the Provincial Freeman prints an article correcting the original article about the convention that they published. This article says to look to the Aliened American for the correct convention information. Martin Delaney submitted this article. He tells the Provincial Freeman that “as your paper will also have an English or trans-Atlantic circulation, we desire to be properly represented in this movement, and not made to appear ridiculous among foreigners.” He also corrects the original advertisement in saying that the number of allowed delegates was misquoted and that five is not the mininum amount of delegates allowed.

There is not an existing copy of the Aliened American with the original advertisement. Instead, the image to the right is of Delaney’s article in the Provincial Freeman. 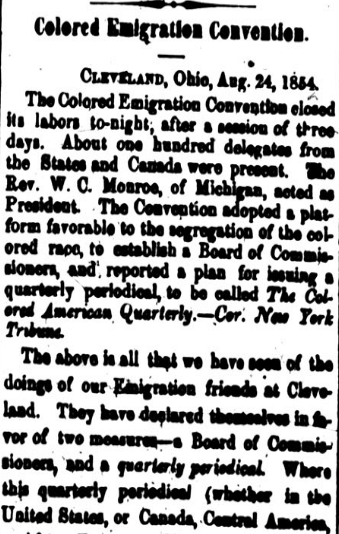 The image to the right is of the article mentioning the quarterly periodical.