What Did They Eat? Where Did They Stay? Black Boardinghouses and the Colored Conventions Movement

Cleaning was another form of invisible but necessary labor that Black women performed to keep a boarding house running. There was nothing particularly unique about the chores that they performed, but the volume of work increased significantly with boarders. What was significant about the work for Black women was the context in which they performed it. As Pauline Hopkins’s novel, Contending Forces, illustrates, the list of chores necessary to complete in between boarding guests reflected the desire to attract business and referrals. As Hopkins wrote, Dora, daughter of the boardinghouse proprietor Mrs. Smith, “had been upstairs the best portion of the day preparing a room for an expected lodger. There had been windows to wash, paint to clean, a carpet to tack down, curtains to hang and furniture to place in position–in short, the thousand and one things to do that are essential to the comfort of the lodger and the good reputation of the house.” This kind of care and attention would have contributed to the conviviality of the house during the Colored Conventions, encouraging the delegates to continue their conversations after adjournment. While delegates would likely not spend time in the boardinghouse kitchens, the cooking and cleaning that occurred in that space was essential to the overall atmosphere of the house. The advent of stove cooking, for example, not only increased the labor involved in food preparation, but was also accompanied by a different cleaning regimen. “Stoves, unlike fireplaces, had to be cleaned at the end of each day, and stove polish (a black, waxy material) applied fairly regularly” to ward off any rusting that would damage the appliance. Oil lamps, such as the ones lit by Dora in the boardinghouse, also required an enormous amount of care. Along with the fire danger and need to keep the wicks trimmed, oil lamps also required regular (sometimes daily) cleaning. Fires, stoves, and lamps all burned fuel that deposited soot all over the home, and if the house was not cleaned on a regular basis, the surfaces could quickly be covered by it. Laundry, too, was an incredibly time-consuming and arduous chore. Boardinghouse keepers always washed bed linens and often the boarders’ clothes; the washing for a family alone could take all day. Housework in the nineteenth century involved intensive labor for the women of the house, and the addition of boarders to the household compounded the work. But this “invisible labor” had the potential to pay off. By creating and cultivating a warm, inviting, accommodating, and clean environment, boardinghouse proprietors could increase their influence with convention delegates, create business to support their families, and make a positive impact on their communities. 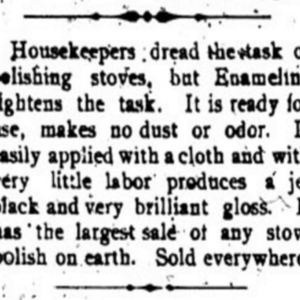 This advertisement from 1898 suggests that stove polishing was an arduous and unpleasant chore in earlier years of the 19th century. 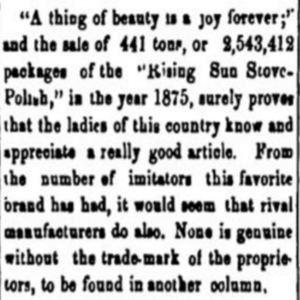 ‘A thing of beauty is a joy forever;’ and the sale of 441…” The Christian Recorder. August 17, 1876. Accessible Archives. African American Newspapers: The 19th Century. Reproduced by permission. www.accessible-archives.com/

‘A thing of beauty is a joy forever;’ and the sale of 441…” The Christian Recorder. August 17, 1876. Accessible Archives. African American Newspapers: The 19th Century. Reproduced by permission. www.accessible-archives.com/ 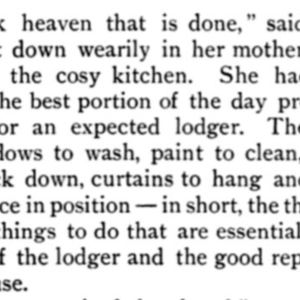 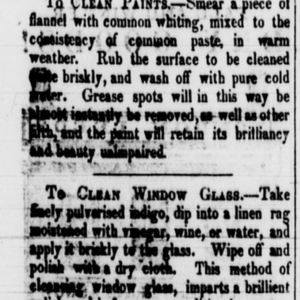 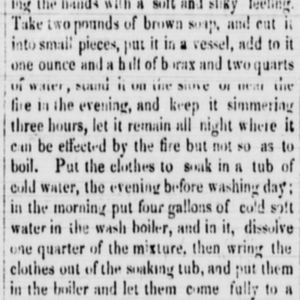 This newspaper clipping provides a suggestion for laundry method that was promised to save labor. By modern standards, it is still quite time intensive. 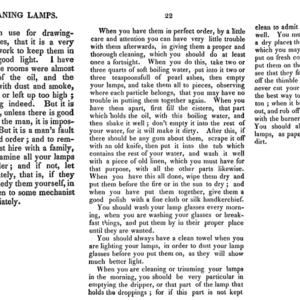 While this book is not targeted to the self-supporting African Americans who ran the boardinghouses, the process of maintaining lamps was essentially the same.

Ruth Schwartz Cowan, More Work for Mother: The Ironies of Household Technology from the Open Hearth to the Microwave (London: Free Association Books, 1989), 62.