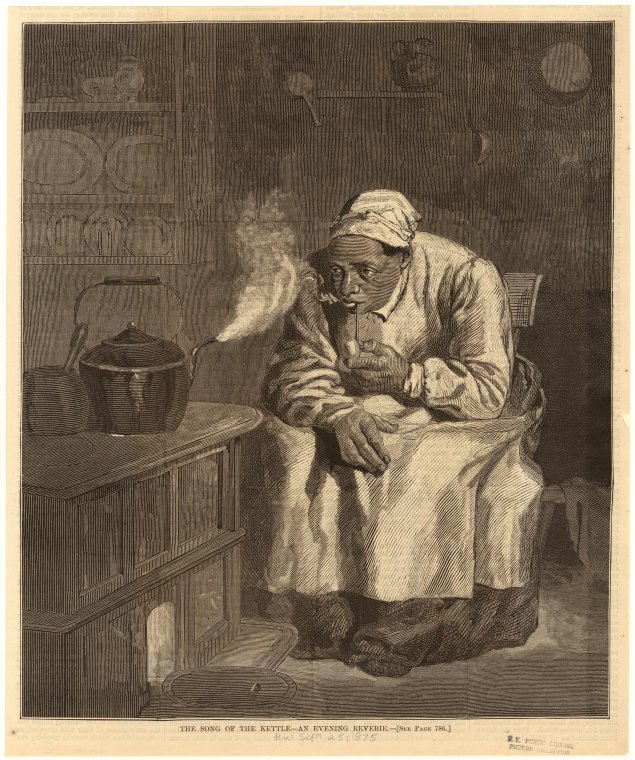 As Amie Long’s menu illustrated, the food choices that women boardinghouse keepers made were integral to attracting and building rapport with their guests. It is likely, however, that the covert politicization of food went unnoticed by male delegates. Anthropologist Daniel Miller uses the term “humility of things” to describe the phenomenon where society relegates certain objects as background scenery; despite their invisibility, these objects embody a great amount of power because of their ability to structure normative behavior.

Many of these “invisible” objects lie within the realm of “women’s work,” which, for Black women, was fraught with contradiction and dissonance on multiple levels. Sociologist Marjorie L. DeVault noted that “women learn to ‘care’ because the production of a ‘family’ as a socially organized material setting requires particular kinds of coordinative and maintenance activities,” but the ‘family’ she describes need not be interpreted strictly. As Carla Peterson explained, “living arrangements reflected an adaptation of African family patterns; households were based not primarily on nuclear family structures but rather on larger domestic networks that often included non-kin members.” For African Americans, the cooperative ethos has always been integral to group survival, and for Black women in particular the household work they performed in caring for their families extended to encompass the community as a whole.

Conversely, many Black women were enslaved or employed as domestic servants, enduring brutality and abuse. As a result, domestic work became emblematic of their subordinate and oppressed status. Historian Jacqueline Jones reminds us however that “as a form of productive labor, housework was not intrinsically demeaning. Black women of course performed the same services for their own families as….whites.” The perception of the work changed with social context — and the convention debates considered these issues explicitly.

While caring work has historically been undervalued, it is by no means simple or easy. The expanded living arrangements associated with the operation of a boardinghouse were accompanied by significant increases in the amount of housework that women had to do. However, the “labor-saving” technological innovations of the nineteenth century (such as manufactured cloth and gas lamps) did little to alleviate their burden. Instead, as a study by Ruth Schwartz Cowan illustrated, “Virtually all of the stereotypically male household occupations were eliminated…and many of those that had previously been allotted to children were gone as well” (such as leather-working and water-fetching). A female lodger may have assisted with the increased domestic workload, but female boardinghouse operators received declining help from their husbands or children.

» Use drop-down menu on left-hand side to explore the different kinds of “humble” objects and invisible “caring work” that contributed to the smooth operation and success of the Colored Conventions.

Marjorie L. DeVault, Feeding the Family: The Social Organization of Caring as Gendered Work (Chicago: The University of Chicago Press, 1991), 12.

Ruth Schwartz Cowan, More Work for Mother: The Ironies of Household Technology from the Open Hearth to the Microwave (London: Free Association Books, 1989), 64.