Female-owned boarding houses did not simply stem from an ethic of care. In submitting advertisements to newspapers, Black women drew from a need to earn a living and, oftentimes, also from their desire to engage in racial uplift. Historian Juliet E. K. Walker indicated that about five percent of free Black women operated boarding houses, and that through advertising in the antebellum Black press they competed heavily, charging lower rates and offering more amenities. Competition such as this likely did not contribute to group survival, but “community based social activism” became extremely important to prevent fracturing. This kind of activism took place at the intersection of an issue important to the everyday lives of community members and a public issue.

Boardinghouses were central institutional structures where much of this social activism took place. Women entrepreneurs often functioned as community brokers, that is, they served as conduits between the politics expressed in formal meetings, and the planning, deliberations, and discussions that could help these women to affect the changes they sought to see within and beyond their walls.

By hosting boarders, and convention delegates in particular, Black women often used their homes for building avenues of political power. While they could not directly participate in the official discourse of the convention, feeding and sheltering Black men allowed that discourse to continue in their homes. As hostess, it was part of the woman’s role to facilitate, interject, and participate in the conversation around the dinner table. This informal participation gave women the opportunity to shape the votes and political decisions of the delegates, remaining part of the discourse.

While provisioning, women were also forming networks and exchanging information. They discussed political issues while preparing meals and in sewing circles. They lobbied husbands, sons, male relatives, and guests and helped one another to formulate plans for encouraging and nudging the men in their lives to make important decisions in political affairs. If women could not debate issues on the convention floor, they could certainly do so in their parlors, kitchens, and other rooms of their house. For more about Black owned boarding homes, click here to read Harry Lewis’s essay “Black-Owned Boarding Houses in the Post-Bellum Colored Conventions Movement.” 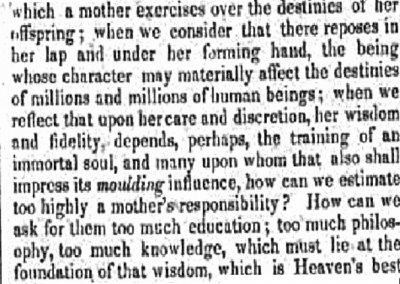 Influences of the Mother

A clipping from a long letter published in the Liberator. Minnie Myrtle, “Commonplace Women,” The National Era, June 5, 1856. Accessible Archives. 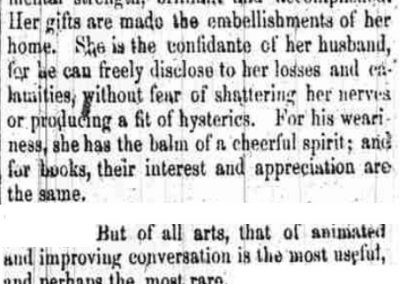 A clipping from a letter on the intellect of women. Minnie Myrtle, “Commonplace Women,” The National Era, June 5, 1856. Accessible Archives. These clippings suggest how politically-inclined women can play an indirect role in politics through their family members or guests through the art of conversation.