What Did They Eat? Where Did They Stay? Black Boardinghouses and the Colored Conventions Movement

This exhibit looks at the concrete needs, the housing and food, that are needed for a city or neighborhood to host a convention. It asks “why is so much of that labor hidden?”

How do digital tools help us make this hidden labor visible—especially the work performed by Black women?

This exhibit includes a map of boardinghouse advertisements—where they appeared, how they were worded, and who posted them.

What do these ads tell us about the community in which conventions were held? Why is it important to look at these advertisements together?

This exhibit’s Inside the Boardinghouse StoryMap visualizes what a boarding house might have looked like in the nineteenth century and indicates what each room would have been used for.

Why is it important to explore and analyze the spaces that Black activists occupied? What is the role of food in these spaces?

In the essay on which this exhibit is based, Psyche Williams-Forson explores how objects and things can influence people’s expectations, actions, and behavior within a given space without being noticed.1 She asserts that providing food and lodging allowed Black women to participate in the Colored Conventions. In her essay, Gabrielle Foreman argues that providing housing and food is building activist infrastructures.2

Although most women were not explicitly acknowledged in convention minutes, what questions must we ask to trace and document their participation? What new insights can we glean by looking at how what often is considered domestic labor can be seen as movement building?

1 See Psyche Williams-Forson, “Where Did They Eat? Where Did They Stay?: Interpreting Material Culture of Black Women’s Domesticity in the Context of the Colored Conventions,” The Colored Conventions Movement: Black Organizing in the Nineteenth Century, eds P. Gabrielle Foreman, Jim Casey, and Sarah Lynn Paterson (Chapel Hill: University of North Carolina Press, 2021), 86.

While Underground Railroad conductor, businessman, and activist William Still has been written about by many historians, this exhibit turns our attention away from him to acknowledge his wife Letitia Still’s life and work. The exhibit page The Still Family in Philadelphia centers Letitia Still as a businesswoman, activist, and organizer in her own right.

How does privileging the domestic and public work of Black women such as Letitia Still destabilize common assumptions about nineteenth-century Black organizing being a male arena?

Black material culture–the studies of objects as purveyors of culture, identity and cultural and intimate relationships–is often overlooked when it comes to documents that only highlight people’s declarations and words.

How does this exhibit turn our attention to the importance of  Black material culture? What and who goes unexamined if we take issues of Black political culture off table?

Write a paragraph to a page outlining what you think this exhibit does best.

If you wanted to extend the analysis of Black women’s work in the conventions, what would you add, center, or develop? 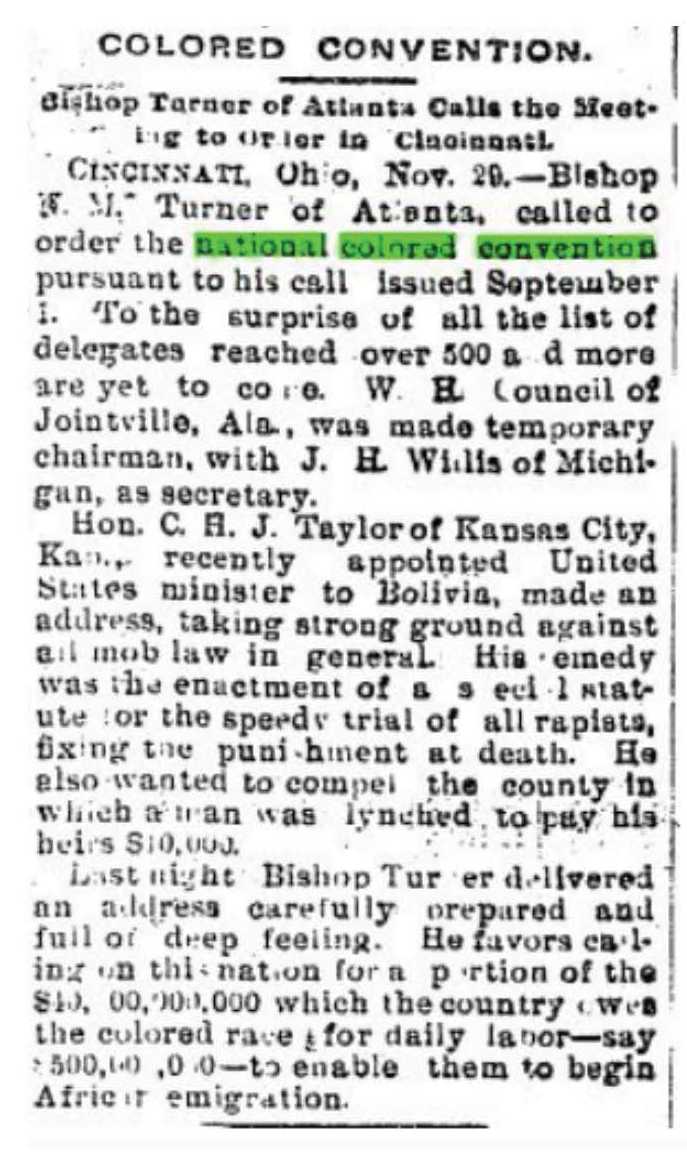 This teaching guide was created in spring 2021 by Samantha De Vera in collaboration with P. Gabrielle Foreman.

Hunter, Tera W. To ‘Joy My Freedom: Southern Black Women’s Lives and Labors After the Civil War. Cambridge: Harvard UP, 1997.

Jones, Jacqueline. Labor of Love, Labor of Sorrow: Black Women, Work, and the Family from Slavery to the Present. New York: Basic Books, 1985.