Much of the attention on the Colored Conventions, and on the minutes of these conventions, has focused on content—the important issues about educational access, emigration, legal and labor rights that were debated and entered into the record year after year.[1] When we focus on the conventions with an eye to unpacking the political rituals that were engaged in these debates, we notice how the minutes record a specific type of behavior—curating a performance as they likewise curate discussions of issues of the day. In order to better understand the conventions as shaping not only the political discourse of the Black community but also standards of social behavior, we need to understand how the performance of these social norms were critically important to the goals of the Colored Conventions and the principles they espoused. 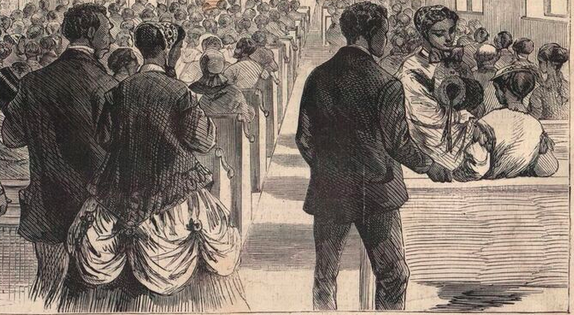 In the image above, we can glean some of these expectations of conduct. On the left, a man escorts a woman to her seat, while two women and a child talk together on the right. Another man overlooks their conversation. Possibly, he is waiting to be introduced or greeted; or perhaps he is the escort of one or all of the ladies. The image exudes an air of gentility, emphasized by the clothes of those in attendence. As a public event open to both sexes, the conventions would be guided by strict conduct expectations expressed via dress, conversation, and the way in which delegates worded their addresses.

Throughout the minutes, we can trace references to quite a few rules of conduct that would have been widely understood by audiences of that time for the social norms that they represent. These rules are related to both the political codes of conduct—such as who can speak and for how long—but also to the type of behaviors deemed socially acceptable from attendees. The minutes offer commentary upon the expected behavior of delegates as well as the broader audience who participated in this ritualized event.