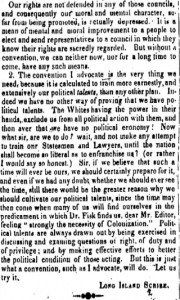 This letter by “Long Island Scribe” demonstrates how the Colored Conventions were seen as community- and identity-building opportunities.

As the work of scholars who examine the rites and routines that defined the political culture of the early American republic makes clear, conventions are political rituals in their own right. Convention practices were upheld with a profound reverence for the rites that enacted political citizenship well before Black citizenship was recognized by state and national governments and white America at large. Specific customs and traditions included seating, roll call, presentation of song and prayer, determination of issues to be examined, who debated these issues, and how these topics were debated; these habitual and ceremonial aspects of the Convention proceedings were moments of political ritual and not just important because of their content. Although scholarship continues to focus on the content of speeches and resolutions, the performance of ritualized practices elevated state and national Colored Conventions from community gatherings to complex political acts. It is through these collective experiences that free Blacks embodied republican virtues and reaffirmed for each other their commitment to activist and anti-slavery living and reform.

Larger political traditions of the period influenced the multiple state and national convention meetings Blacks held from 1830 on. Conventions were an established feature of the American political landscape during the 19th century and were popularly known as an expression of “meeting place democracy.”[1] Not only did the elected officials of the period meet repeatedly in constitutional conventions, but rank-and-file white men also organized alternative political conventions in their communities; as David Gellman and Quigley have pointed out, “one of the most striking features of nineteenth-century American politics was the regularity with which states came together to revise their constitutions.”[2] These ranged from less polished spontaneous gatherings to more formal conventions.[3] These were recognized as “legitimate unofficial bodies” deriving their authority “from the constitutional precedent of the right of the people to assemble and petition the government.”[3] The popularity of conventions within white communities reflects the extent to which participation in the electoral process was coming to be understood as an expansive, democratic white male prerogative rather than only a privilege for the aristocratic white male elite.

The Colored Conventions should be examined against this backdrop of larger political debate and activism. Black delegates and participants participated in and modeled a longer history of people coming together as citizen subjects. In these spaces, they crafted political opinions in new terms and rehearsed new ways of representing their wishes as constituents to elected officials.[2] The Colored Conventions were also a way for Black communities to demonstrate political abilities. To do this, they had to establish themselves as not just imitators of the political conventions of the day, but as politicians and orators in their own right. They relied upon various formal elements that were repeated across the many years of convention history in strikingly similar ways. By creating their own political rituals enacted at and through the Colored Conventions, Blacks illustrated to the larger white political community that they were as able as any white statesman or politician of the day. And, as demonstrated in the newspaper article below, this sentiment regarding the Conventions was widely held.[4]