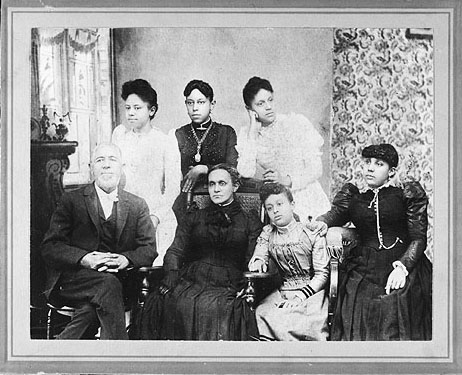 Photograph of the family of Senator Hiram Revels, dated in the 1890s. Courtesy of The New York Public Library. www.nypl.org.

The nineteenth century was broadly concerned with correct deportment. This preoccupation can be traced in newspaper articles and editorials exhorting the general community to assert higher standards over wayward members–and telling them just how to do so–and in conduct manuals as well. Scholars often turn to conduct manuals to better understand gendered and classed norms of behavior. Feminist historian Nancy Armstrong observed that conduct books were directed at “virtually all people who distinguished themselves from the aristocracy, on the one hand, and from the laboring poor on the other.”[1] She shows how such manuals helped create middle-class cohesion by delineating gender roles and by idealizing the domestic sphere.

Advice literature by and for aspiring middle-class antebellum Black readers consistently linked personal behavior with the antislavery cause in ways that rarely occurred in white communities. Sketching out the constellation of values and behaviors associated with what Colored Convention delegate, Samuel Ringgold Ward, might call an “antislavery life,” antebellum Black conduct discourse urged free Blacks to fashion themselves into living embodiments of their reform sensibilities. Early African American conduct writing provided models of ideal Black mothers, fathers, and virtuous citizens for free Black readers to emulate.

The photograph shown above presented one such exemplary postbellum family. Notice how Senator and Mrs. Revels are sitting next to each other, demonstrating their relationship as the family-makers. Mrs. Revels is at the very center of the group, emphasizing a mother’s role as the home-maker and “heart” of the family. Senator Revels is depicted as relaxed and at-ease, emphasized by his crossed legs and folded hands. The clothing the family wears is respectable. The family is posed in such a way as to emphasize their bonds with each other (leaning on the chair, subtly encroaching on each other’s space with a hand on a shoulder). While Senator Revels makes eye contact with the camera, the women appear to be thinking about other things, as with the daughter who rests her head on a bent arm and looks away from the camera.

As we examine the Colored Conventions movement, it’s helpful to remember that ideals of correct deportment moved from the homes delegates came from, to the gatherings they attended. It shaped the content and the delivery of their speeches. “Correct” deportment would also have shaped less public interactions, such as those that occurred in boarding houses, as delegates and attendees continued the discussion started in the convention halls. (For more information on delegates and boarding houses, see Boarding Houses.)