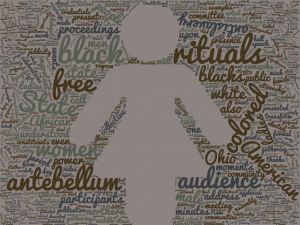 This exhibit examines convention rituals across decades, both before and after the Civil War, in order to establish how aspects changed over time and how political rituals became an established tradition. This exhibit shows how the Colored Conventions are a performance of political citizenship. At a time when Blacks were so often denied political inclusion, much less leadership, these acts of embodied rhetoric, oratory, and debate are practices of rhetorical art and political resistance. Black women were always active participants in political ritual and performed a wide variety of roles at the conventions even though their roles have been largely ignored in the past. This exhibit also seeks to emphasize women’s roles in the conventions so they can regain their necessary place as engaged political activists in their own right.

Specialists in African American history have long recognized the state and national Colored Convention proceedings of the antebellum era to be documents of extraordinary political importance. As early as 1969, in the introduction to his collection of The Minutes of the Proceedings of the National Negro Conventions, 1830-1864, historian Howard Holman Bell declared that antebellum black conventions must be understood as “the first ‘national association for the advancement of colored people.’”[1] Roughly one decade later, in the introduction to their collection of the Proceedings of the Black State Conventions, 1840-1865, Philip S. Foner and George E. Walker wrote that “for keen analyses of the issues outlined and for breadth of research and argument,” the proceedings offer examples of the most “outstanding political documents of the period.”[2] And in recent decades, scholars have irrefutably demonstrated that the antebellum state and national Black conventions were essential for the development of African American political consciousness.

Although the tradition of Colored Conventions has largely been ignored in scholarship on the nineteenth century, much of the scholarship that acknowledges the conventions reads the minutes solely for their insight into the recurring themes and shifting political stances that defined Black protest thought in the period. Often, this scholarship traces, for example, debates over whether to prioritize emigration outside the United States or to remain in the US, or to pursue interracial coalitions or promote racial separatism, for example. More recently, scholars have turned to antebellum state and national convention proceedings to gain insight into the factors shaping the emergence of a free Black leadership class, the expansion of African American print culture, and the growth of Black women’s public activism.[3]