The second half of the nineteenth century saw significant demographic shifts in the population of the United States. In order to better understand the southern Colored Conventions of this period, we foreground some of the trends and patterns in populations, particularly as they related to the formerly enslaved African American population in the South.

The total population of the United States as reported in federal censuses grew in very large numbers in the middle of the nineteenth century, from 12,866,020 in 1830 to 50,155,783 in 1880. Much of this growth was due to the arrival of immigrants, particularly from Europe and Asia. The first graph below reveals a steep increase in the total proportion of the population identified as “white” between 1850 and 1860.

Hover over the points and lines on the graphs below for more detailed information about the size of various demographic groups.

[1] United States Department of Commerice, Bureau of the Census. Historical Statistics of the United States, Colonial Times to 1970. (Washington, D.C.: Bureau of Census, 1975).

In the introduction to Historical Statistics of United States, Colonial Times to 1970, the authors stated that “The classification of the population by race reflects common usage rather than an attempt to define biological stock. As a result, the white and Negro populations usually have not been divided into racial subgroups (although the white population has been classified by ethnic origin), but American Indians and some Asian groups (e.g. Japanese, Chinese, Korean, Filipino, etc.) have typically been identified with country of origin. Through 1960, the classification of the population by race was usually obtained by the enumerator’s observation. Persons of mixed white and other parentage were usually classified with the other race. The category Indian included unmixed American Indians together with persons who were of mixed white and Indian Ancestry if they were enrolled on an Indian reservation or agency roll.”[2]

The graphs below demonstrate the federal government’s quantitative perspective on race in the United States. It also shows demographic changes in the different regions of the United States over the 1850, 1860, and 1870 federal censuses. African Americans were consistently a much larger proportion of the total population in the South than in any other region.

Hover over the bars to find out their exact numerical values.

[2] United States Department of Commerce, Bureau of the Census. Historical Statistics of the United States, Colonial Times to 1970. (Washington, D.C.: Bureau of Census, 1975), 19.

Below are additional maps that show how the United States was divided by region in the nineteenth century. 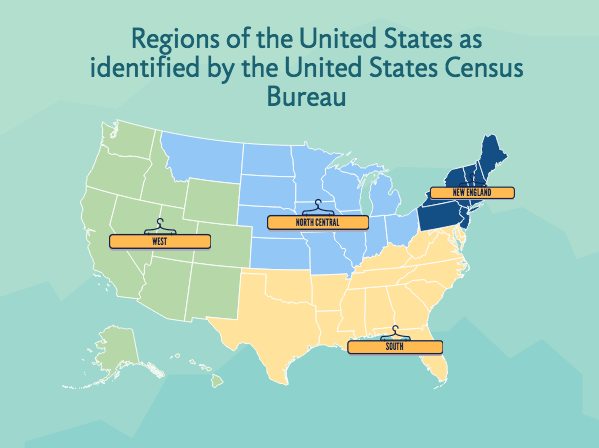 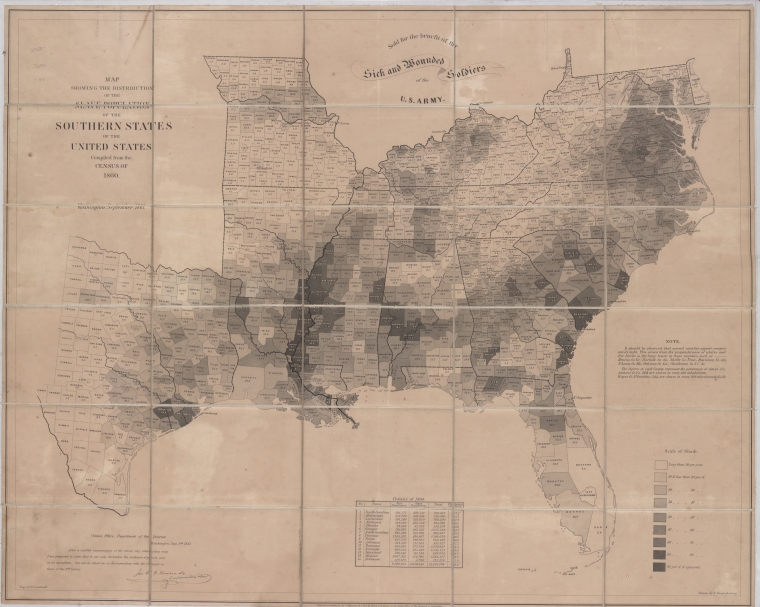 Map made from data from the 1860 US Census depicting the distribution of enslaved persons in the Southern states, which was sold in 1861 to raise money for sick and wounded soldiers of the U.S. Army.