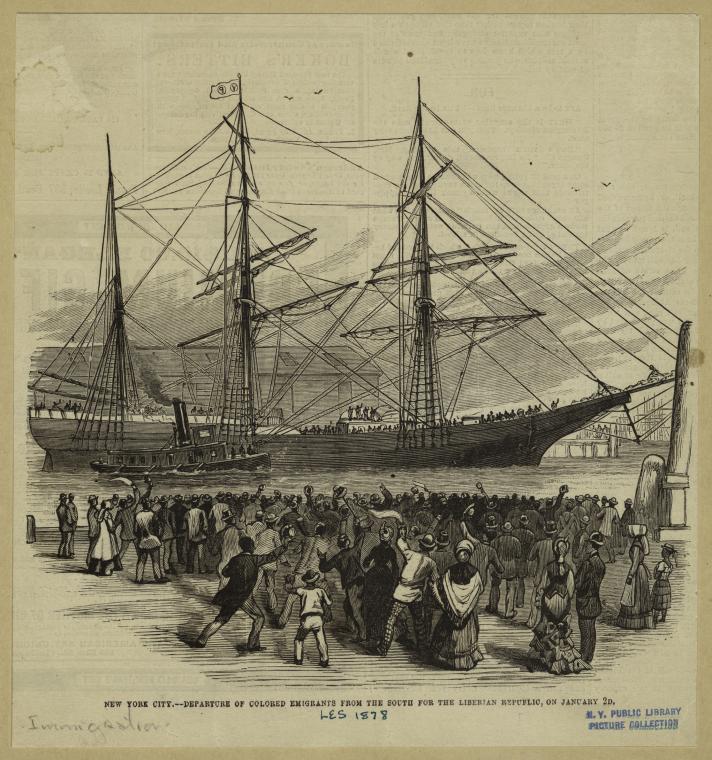 This print, captioned “New York City : Departure Of Colored Emigrants From The South For The Liberian Republic, On January 2d.,” was made in 1878. Courtesy of New York Public Library.

These images in this section explore emigration to Liberia, the Liberian Display at the Centennial Exhibition held in Philadelphia in 1876, and maps and images made in Liberia. The images attempt to create a sense of the material and visual experiences of southern Black emigrants to Liberia in the postbellum era.

The Republic of Liberia was founded in 1847, after a group of primarily African American emigrants declared their independence from the American Colonization Society (ACS) and formed a new nation from the former American colony.

Although the many members Black elite never embraced emigration, particularly when done under the auspices of the ACS, many African American emigrants chose to make a new home in Liberia. Postbellum emigration to Liberia built upon antebellum efforts, including those of both the American Colonization Society and the African Civilization Society.

Many Black southerners chose to emigrate to Liberia in the aftermath of the Civil War, choosing a path of Black self-determination as an alternative to the societal arrangements emerging from Reconstruction. The graph below, made from numbers of emigrants reported by the American Colonization Society, illustrates the total number of emigrants who traveled to Liberia from southern states between1865 and 1879.

Emigrants to Liberia from the Southern States

Hover over the bars for exact numerical values.

When considering the graph above, it is also important to remember that not all emigrants chose to stay in Liberia. The individuals who did choose to emigrate came from many of the southern states, though certain states such as Georgia and South Carolina had many more emigrants.

The chart and graph above were both made using data collected by the American Colonization Society. Though the ACS is often remembered for its role in the antebellum period, it played an active role in emigration to Liberia through the end of the nineteenth century. It did not officially disband until 1964. The ACS made donated its materials and records to the Library of Congress in 1913 and in 1964. Though these files provide compelling documentary, visual, and material evidence of life in Liberia, they must be recognized within the context of the ACS’s organizational and racial biases. Although some African Americans, such as Bishop Henry McNeal Turner, were active participants in the ACS, the omnipresence of the ACS in the historical record of Liberia inserts a predominantly white point of view atop the story of this independent Black nation. Recognizing the complicated role this organization continued to play in Liberia in the postbellum era adds new dimensions to the history of emigration.

The ACS continued to charter ships that frequently traveled from the United States to Liberia. Yet, evidence survives which makes clear that some emigrants did travel to Liberia outside of the auspices of the ACS. The second image above tells the story of a group of these individuals. There were also Black-led organizations that that commissioned ships to Liberia; an example is the Liberian Exodus Joint Stock Steamship Company and International Migration Society. The many paths African Americans took to get to Liberia reflect the complicated attitudes towards emigration in the postbellum era. 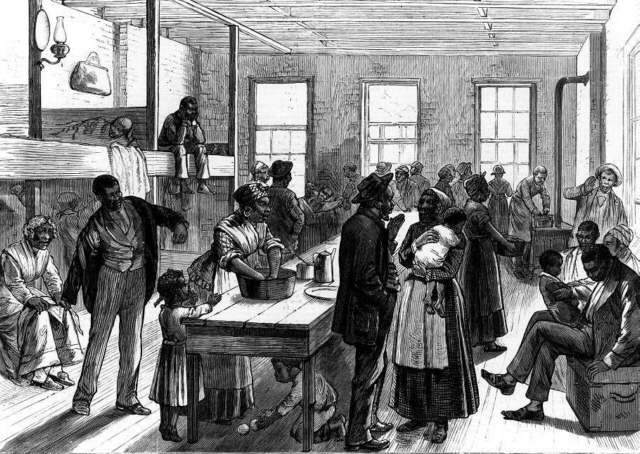 This woodcut engraving was printed in Frank Leslie’s Illustrated News on April 24, 1880, with the caption “Refugees awaiting transportation to Liberia at Mr. Olivet Baptist Chapel, New York City.” Image via the Library of Congress.

“In the spring of 1880, a group of 150 African-Americans from Arkansas was living in temporary quarters at Mt. Olivet Baptist Chapel on 37th Street in New York before going to Liberia. Because the ACS had chartered the only ship that regularly went to Liberia, this group, which was going under its own auspices, was trying to charter another ship. The article that described their circumstances, entitled ‘Colored Exodus from Arkansas,’ stated that another 50,000 Blacks were preparing to emigrate from the Gulf states to Arizona and New Mexico, where they planned to purchase farm land.”1 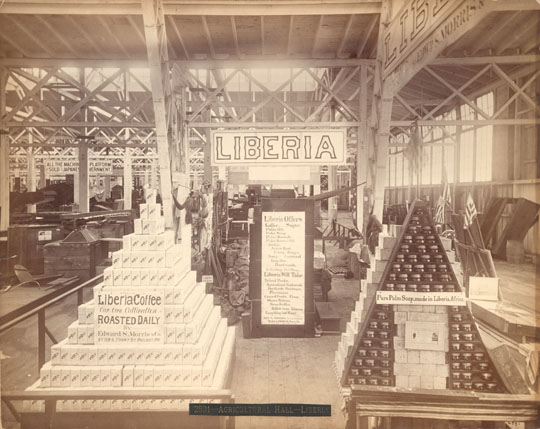 This silver albumen print, captioned “Agricultural Hall – Liberia” depicts the Liberian contribution to the Centennial Exhibition held in Philadelphia in 1876. Courtesy of Free Library of Philadelphia.

Liberian president Joseph Jenkins Roberts expressed early interest in contributing a display to the Centennial Exhibition to be held in Philadelphia in 1876, believing that it might encourage further emigration:

“I have also to acquaint the Legislature that, in a communication received several months ago from Edward S. Morris, Esq., of Philadelphia, we are informed that a place will be assigned to Liberia in the Grand Centennial Exhibition to come off in the City of Philadelphia, United States of America, in the summer of 1876. For several substantial reasons, it strikes me as very desirable that Liberia, if practicable, should be represented at said Exhibition. No doubt Liberia would be able to contribute various articles of native product, that would be interesting to commerce, and perhaps to science. The vast agricultural, mineral, and other valuable resources of this country are but little known to the world. It can scarcely be doubted that a fair representation of the products of West Africa, even as far as at present discovered, could not fail awaken in the United States a spirit of commercial enterprise that would produce most valuable results to Liberia. And further: it appears to me a fit occasion for demonstrating the labor-paying advantage of the country to those in the United States whose attention may have been drawn to Liberia with a view of emigration hither.”[1] 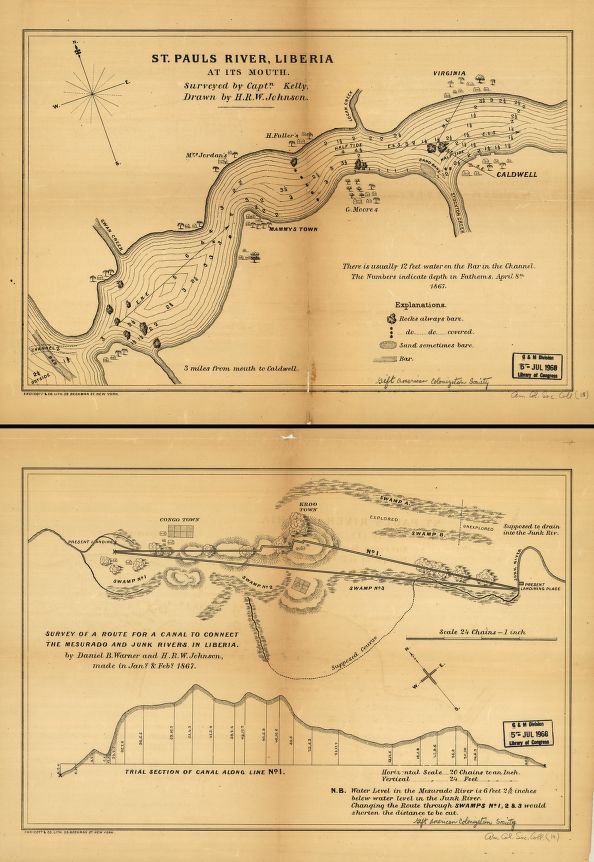 This map, made by a “Capn Kelly,” depicts the depths of the St Pauls River at various points in Liberia. As illustrated above, the many emigrants moved further inland along the river away from the poor soil that marked Monrovia and other coastal areas. Courtesy of Library of Congress. 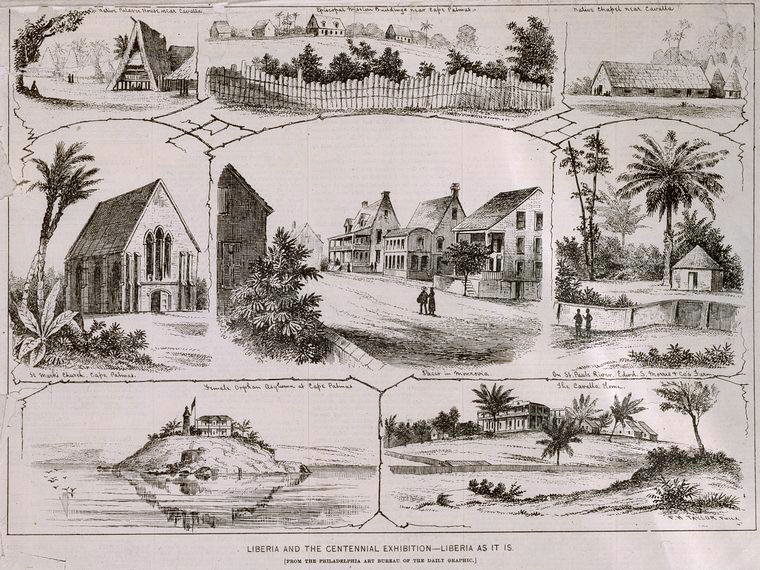 This woodcut engraving was printed by the “Philadelphia Art Bureau of the Daily Graphic,” from a series of sketches that purported to show life in Liberia “As it is.” The image features several vignettes of buildings and scenes in Liberia. Courtesy of New York Public Library. 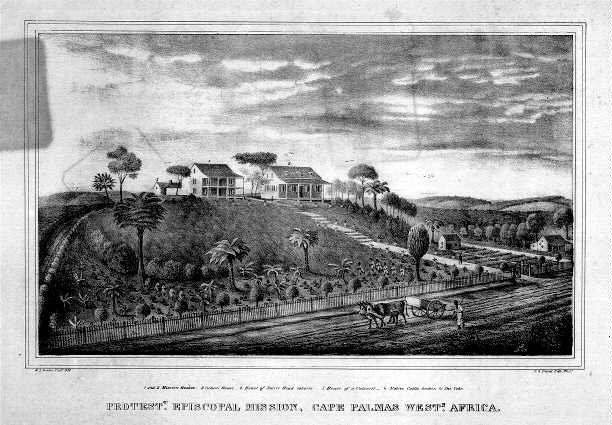 The Maryland Colonization Society founded its own settlment in Liberia called Cape Palmas. The Protestant Episcopal Mission was a hub of this settlement. Courtesy of Library of Congress. 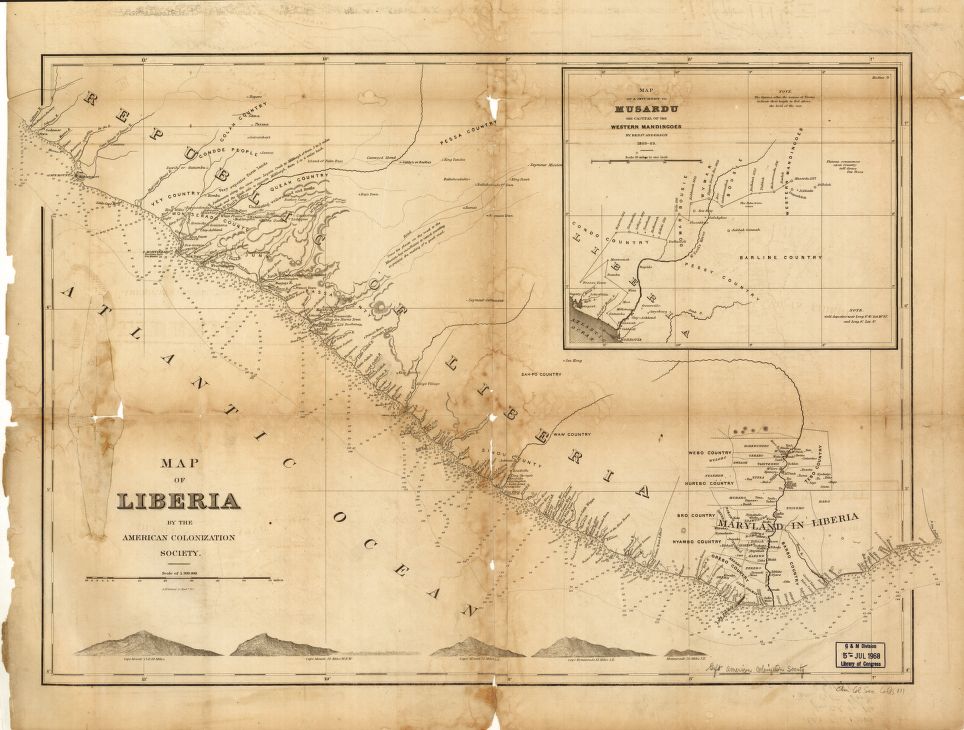 This image is a map of Liberia commissioned and printed by the American Colonization Society in 1870. Courtesy of Library of Congress. 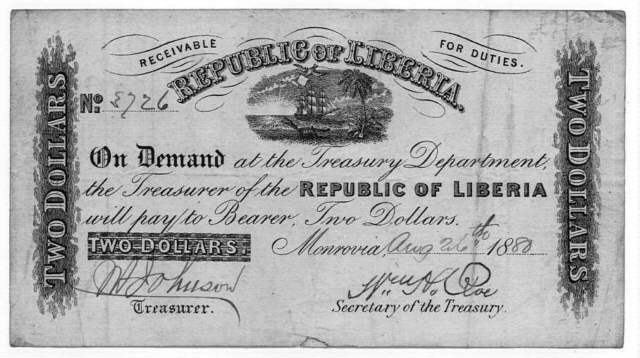 This printed currency was used in the independent nation of Liberia from the 1830s to the 1880s. Courtesy of Library of Congress. 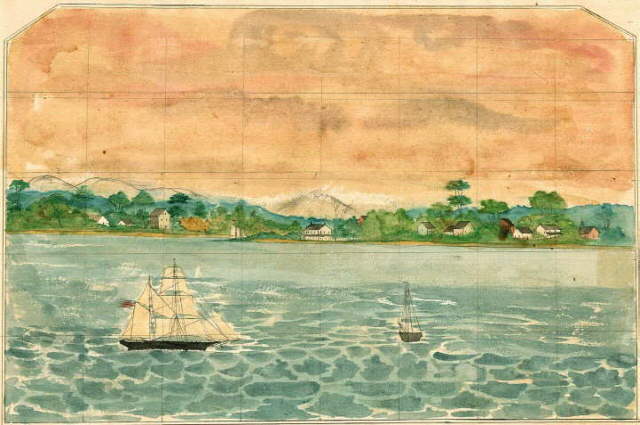 This photomural of a silver gelatin print depicts communities along the banks of St. Paul’s River, to which many emigrants moved in order to escape the poor soil surrounding the coastal capital Monrovia. Courtesy of Library of Congress