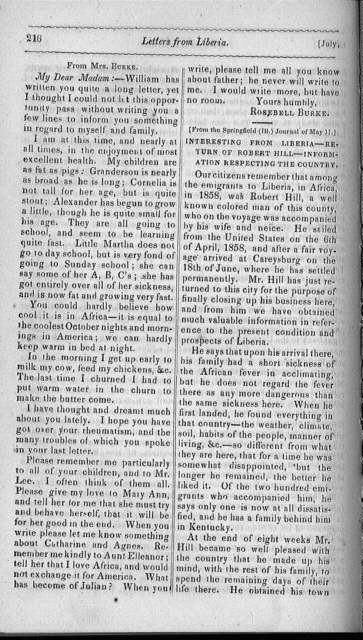 Rosabella Burke, her husband William, and their four children, Grandison, Alexander, Cornelia, and William, emigrated from Virginia to Liberia in 1853. They travelled on the ship Banshee with 257 other emigrants under the auspices of the American Colonization Society.

The Burkes were enslaved while they lived in Virginia, owned by the Custis and Lee families at Arlington House and Plantation, which was located just outside of Washington D.C. George Washington Parke Custis, the owner of the plantation, was an early supporter of the American Colonization Society. He offered freedom to the Burkes on the condition that they settle in Liberia.

The Burkes made this difficult decision, opting to leave the country of their birth to pursue freedom. William trained as a blacksmith before his departure, and once in Monrovia, Liberia, studied Latin and Greek and became an ordained Presbyterian minister.

Rosabella either learned or taught herself to read and write at some point before her departure, as both she and her husband corresponded with the Lees, particularly Mary Custis Lee. One of Rosabella Burke’s letters to Lee was published in American Colonization Society’s journal, The African Repository and Colonial Journal, in 1859 (pictured above).

This letter, a rare survival in the voice of an emigrant woman, demonstrates the tactful and skillful methods Rosabella used to maintain communication with family members she left in Virginia. Though she inquires after the Custis and Lee families, she offers specific, special messages to many of her loved ones who were still enslaved at Arlington House. She included updates about her family that were certainly intended for a much wider audience than just the Lees, using this correspondence to maintain ties and connections with the world she left.

Rosabella displayed incredible fortitude and agency in her successful decision to move her family, including four children all under the age of five, to an entirely new continent. Her published letter and other surviving correspondence highlight this strength.

Though emigration and the American Colonization Society remained highly controversial in both Black and white communities throughout the nineteenth century, Rosabella Burke displayed no regret about her decision to emigrate to Liberia, stating “I love Africa and would not exchange it for America.”