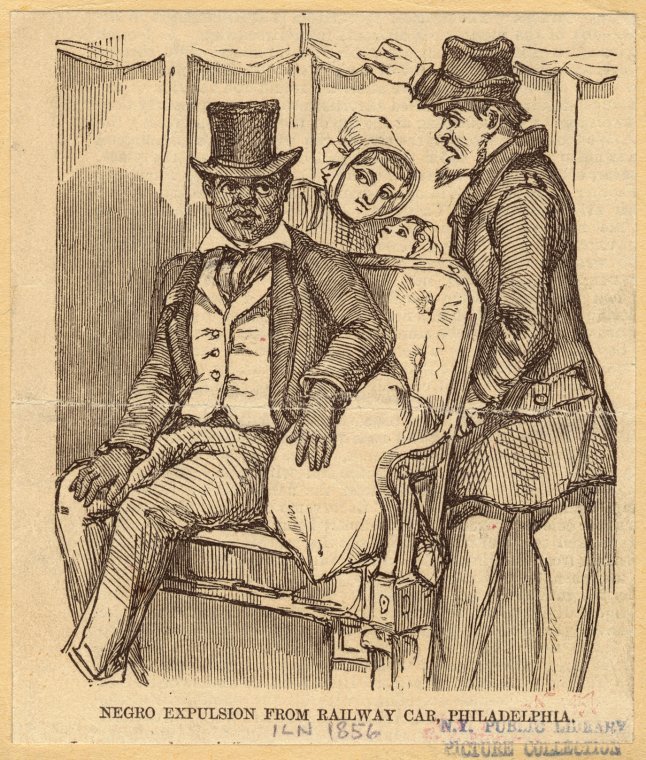 Traveling to four or five states within a few years would have been significant for anyone living in the nineteenth century. Securing lodging, travel fares, and spending a significant amount of time away from work and home were just some of the things that one needed to consider. An African American traveler would have faced more challenges and dangers. Kidnapping and re-enslavement were constant threats even for those with a free status. The reality and looming possibility of racial violence has also been an issue even more pressing in southern states. It is crucial that we acknowledge the great risk that traveling entailed for African Americans in order to better understand the activism that Colored Conventions delegates and attendees enacted.

Abolitionist and Black newspapers often published calls for conventions some time before they took place, publicizing the event to garner greater attention and attendance. These newspapers undoubtedly reached unintended audiences, too, allowing those with anti-Black sentiments to know when and where Blacks were planning to organize. The well-founded anxiety about bigoted individuals permeates convention minutes. While this fear and carefulness is ever-present in the Colored Conventions movement, it does not often disrupt them. Fighting through the fear, convention attendees exercised their agency, called attention to their wrongs, and labored alongside one another for a brighter day coming.

We look to moments in convention minutes when white violence and prejudice is alluded to. Instead of giving authority to racist assertions or overemphasizing the power their threats had, we hope to illuminate the great sacrifices and courageousness of those Black leaders who risked their very lives to enact social change. Indeed, to white southerners, the Colored Conventions movement epitomized what they feared most: Black agency and intellect. 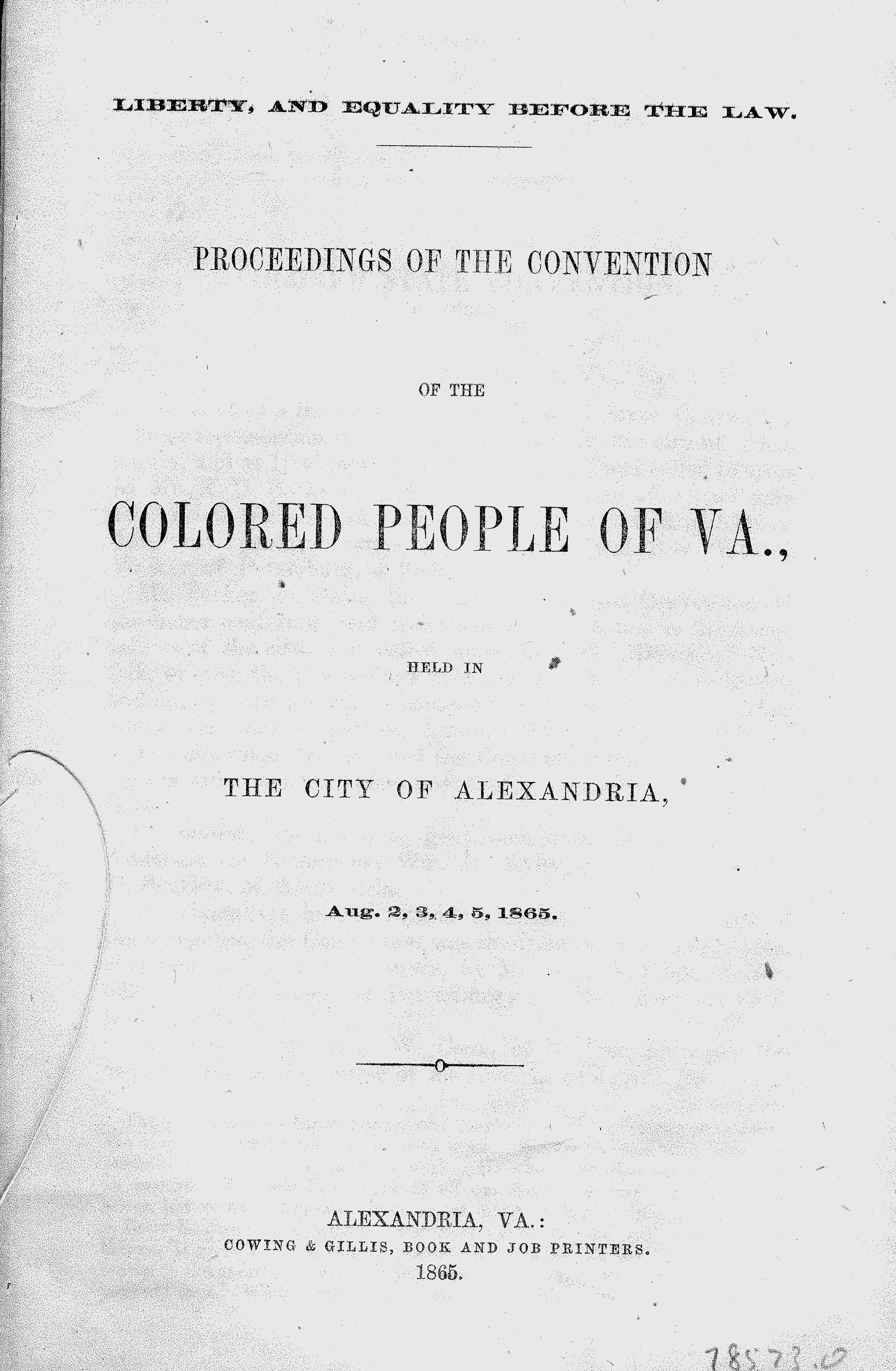 Proceedings of the Convention of the Colored People of Va., held in the city of Alexandria, Aug. 2, 3, 4, 5, 1865. Courtesy of the Library Company of Philadelphia.

The following letter was read by the Secretary. The letter bears the post mark of Washington, D.C., and is directed to Fields Cook and others, of the Colored State Convention, Alexandria, Virginia:

Beware! beware! Fields Cook, you and other negroes will die before the autumn leaves fall upon the unavenged graves of the many Southerners who are buried through our land. You are never to be on an equality with the whites, though superior to many of them; but you, and many of you, will die soon if this Freedmen’s Convention, &c., &c., continues, particularly here in Virginia! So beware! The South must and shall be avenged! The combined powers of Heaven and earth cannot prevent it. The black man, like the Indian, will, in a few years, pass from this land. Slavery, as it was called, was Virginia’s only anchor. Beware! you are all doomed!

Mr. N. H. Anderson, of Richmond, Va., objected to the reception of the letter, while Mr. Hobson thought it of sufficient importance to claim the most solemn consideration of every one present.

Mr. Fields Cook then followed. He said that the letter had been addressed to him and others, that his life was of but little importance, but let him die where or when he might, so he died in the discharge of his duty, his work he hoped would be fulfilled. Such letters could not intimidate him. He should continue to go forward in the discharge of his duty, let the consequences be what they might. 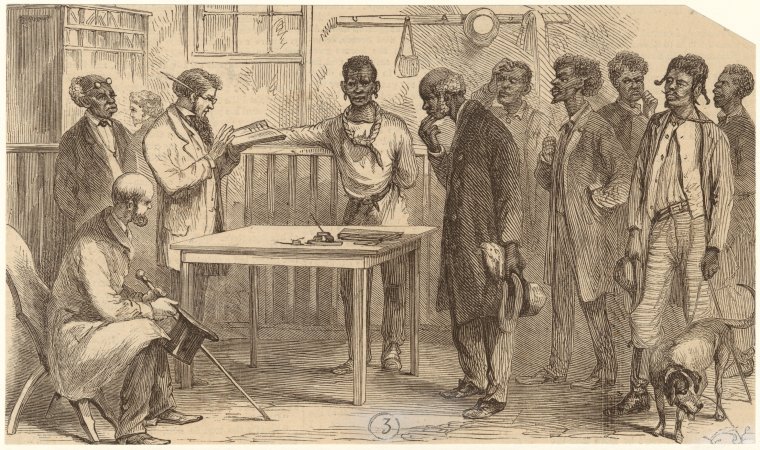 Mr. President and Fellow Citizens: Having but just arrived from a tedious journey of some six days, the latter portion of which was prosecuted on foot, for the purpose of being present at the organization of this honorable body, I find myself wholly unprepared to do justice to the subject under consideration; but as many of us have braved many difficulties to be present at this Convention, to consider these momentous questions, as they relate to us and our State, this is not the time nor place to offer frivolous excuses,as regards our ability to solve them in all their bearings and relations tous. When the angry guns in Charleston harbor told the world that the hand of the paracide had been raised, and the blow directed against the world’s best model of good government, we were scarcely awakened in our prison-house of slavery into sufficient attention to suppose that the gathering forces around us had any reference to the bettering of our condition, though for over two centuries the obedient slaves of the haughty Southron, and as Gen. and as Gen. Blair once said, in a speech in Boston, on the separation of the races, “seemingly bound by ties that amounted almost to those of consanguinity.”

1865, “Proceedings of the Convention of Colored Citizens of the State of Arkansas : held in Little Rock, Thursday, Friday and Saturday, Nov. 30, Dec. 1 & 2.,” Little Rock, AR

A committee of three (Messrs. J. A. Craig, J. A. Norager, J. B. Noble) is appointed to wait on Commanding General, and ask from him, for the colored persons, the same liberty of travelling, going and coming, that other persons enjoy. Messrs. Chaplain Conway and Major Plumley spoke a few words on this question. Maj. Gen. Banks had only been taken as a temporary measure. He thought that if Maj. Gen. Banks had remained a little longer in this Department, it would have been done away with the system, before this time. It will likely be abolished, as soon as the attention of the Commanding General be directed to it. (Applause.) 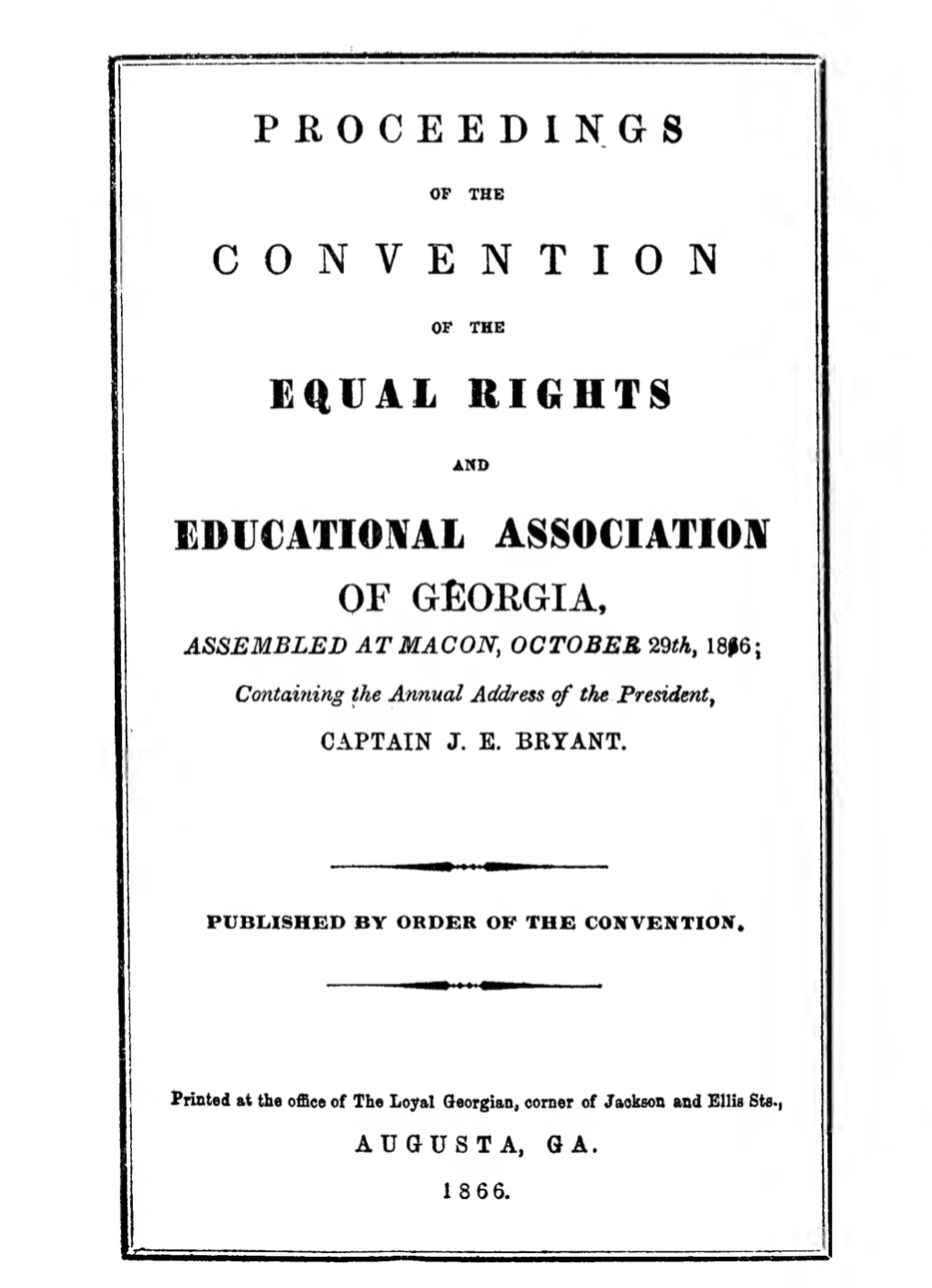 Proceedings of the Convention of Equal Rights and Educational Association of Georgia: Assembled at Macon, October 29th, 1866: Containing the Annual Address of the President, Captain J.E. Bryant

I have received information from nearly every part of the State that white men prevent, if possible, the organization of Subordinate Associations. Several influential colored men have been driven from their homes, because they assisted in the organization of these Associations, and the lives of others have been threatened. I am convinced that the opposition would not be as great if political question were not discussed at the meetings of the Associations. If political discussions can do no good and may do harm, they had better be postponed for the present.

Proceedings of the Convention of Equal Rights and Educational Association of Georgia: Assembled at Macon, October 29th, 1866: Containing the Annual Address of the President, Captain J.E. Bryant 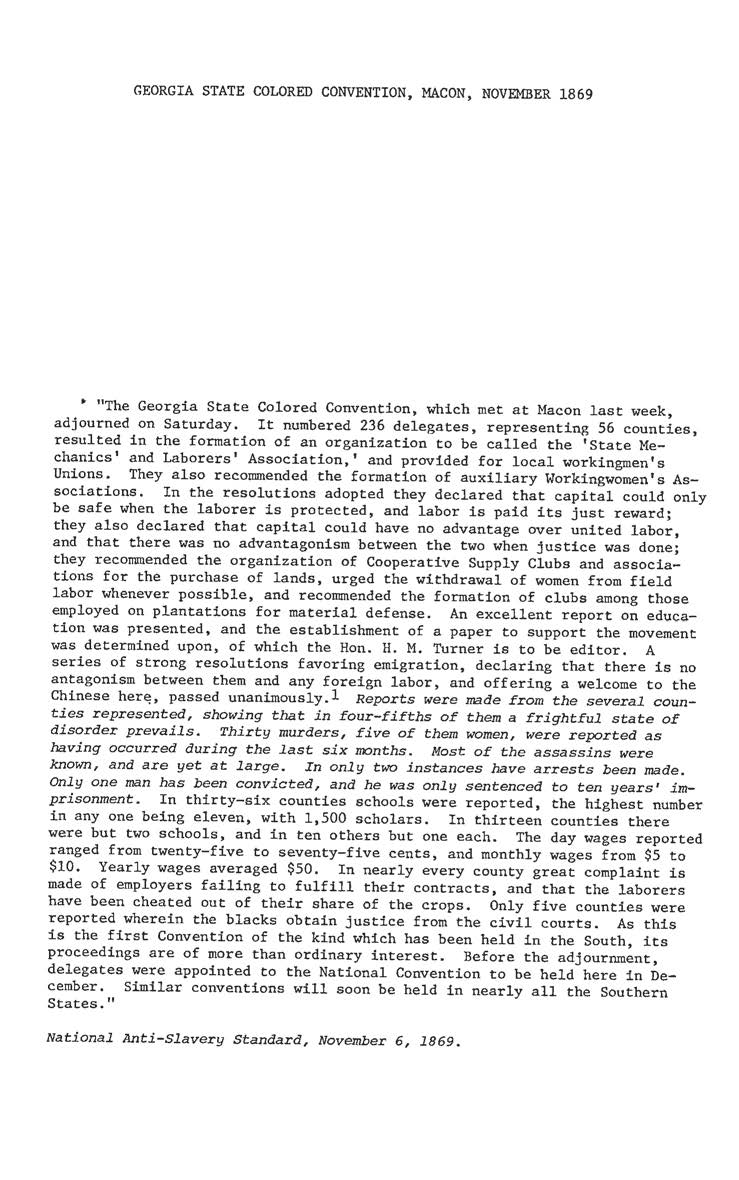 A  series of strong resolutions favoring emigration, declaring that there is no antagonism between them and any foreign labor, and offering a welcome to the Chinese here, passed unanimously! Reports were made from the several counties represented, showing that in four-fifths of them a frightful state of disorder prevails. Thirty murders, five of them women, were reported as having occurred during the last six months. Most of the assassins were known, and are yet at large. In only two instances have arrests been made. Only one man has been convicted, and he was only sentenced to ten years’ imprisonment.

The Committee on Outrages and Crimes presented Conventions the following Kuklux Oath, which was in the Union Flag, published in Jones boron, by Col. George S. Grisham, Feb. 24, 1871, which was read by the Secretary from the platform, being called for by Mr. Ed. Shaw, to show to the members the principles of the organization, which is all over the state.

PALES FACES–OATH OF THE “WHITE BROTHERHOOD.” 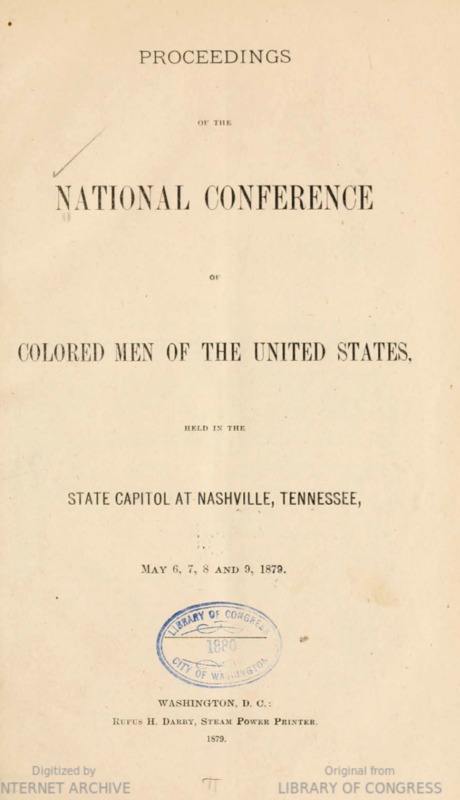 To the honorable the Chairman and the Members of the Colored Men’ s National Conference:

Taking into consideration the self-evident fact that oppression, Intimidation and violence of lawless men have and do now exist men who continue to outrage the rights and privileges granted said colored people by the Constitution of the United States, and render it almost, if not quite so, impossible for colored men to exercise with any degree of safety any of the rights, privileges, or immunities of American citizens, your committee is of the opinion that this exodus owes its origin to this fact more than any other. Your committee would further report that they have carefully examined the resolutions and papers referred to this committee, and after mature deliberation have concluded to report to your honorable body in accordance with the resolution, adopted by you in Thursday’ s session to wit, dividing the subject under various headings.