Saving money is difficult to do no matter the era. For an African American in the 1800’s, it was even more difficult. Elizabeth Gloucester, being a woman, had greater financial challenges, but still won the title of one of the wealthiest women of her time.1 Born to a free woman in Virginia, a young Elizabeth travelled to live with the Gloucester family in Philadelphia, PA upon her mother’s death.2 Among the ten children Elizabeth grew up with, James N. Gloucester, her foster brother, would become both a delegate for the 1843 Convention at Detroit and Elizabeth’s spouse in 1830. The Gloucesters had a total of 6 children, with the first of their sons Jeremiah passing away at only ten months old.3 With a reverend and business partner for a husband, a brood of children, and talents of her own, Elizabeth lead a busy and full life.

Elizabeth first mastered economics as a domestic laborer. Elizabeth worked in the Cook family household during which time she learned about saving, banking, and other financial affairs from Mrs. Cook, who also encouraged Elizabeth to open a personal savings account. Elizabeth eventually opened a successful second-hand clothing store in Philadelphia. The couple moved to New York City where–until 1854–the Gloucesters ran an additional second-hand clothing store on 7th Avenue. In another three years time, they opened a furniture store on 881 W. Broadway.4 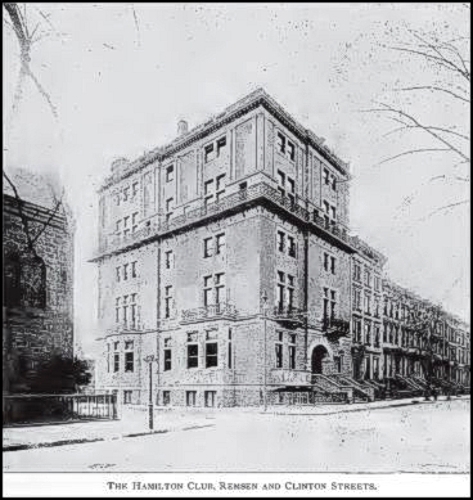 A photograph of the boarding home that Elizabeth and James Gloucester owned in 1878. Previously the Hamilton Club, it was renamed Remsen House when it came into the hands of the Gloucesters.

Due to the success of the businesses, Elizabeth received steady income, and her savings account grew. Elizabeth’s main occupation and source of income came from a boarding house located on 144 Remsen Street, which the couple opened up around 1878 5 Invested in social justice and benevolent activities, Elizabeth “lead fundraising efforts for freedmen and Union soldiers through the Ladies National Union Fair and the American Freedmen’s Friend Society,” as well as gathered donations for the Colored Orphan Asylum.6

By 1870, the Gloucester household was worth $50,000.7 They sold the entirety of their New York properties and invested in Brooklyn real estate worth approximately $150,000. Formerly known as the Hamilton Club, the Gloucesters renamed the property Remsen House.

At the time of Elizabeth’s death in 1883, the property had increased in value to about $300,000 which in today’s standard is about $7 million.8 At the time of her death, the property was to be divided into seven parts and distributed amongst the husband and five children. Their eldest daughter Emma White, now Mrs. Blanchard, received only ten dollars for reasons unknown.9 Elizabeth was a smart and successful business woman who was able to work her way up the ladder from a domestic servant to a property and business owner and the wealthiest African American woman during of era.