Charles Bennett Ray (1807-1886), born free in Falmouth, Massachusetts, was a well-known anti-slavery activist, newspaper journalist, editor, and ordained minister. Ray married Henrietta Green Regulus in 1834, but after her death in 1836, he and Charlotte Augusta Burroughs united in matrimony in 1840. The Rays raised seven children.1 Several of the Ray daughters became notable professionals in law and education. After graduating from Howard University School of Law, Charlotte E. Ray became one of the first African-American women attorneys in the United States.2 Henrietta Cordelia and Florence Ray were New York City public school teachers, biographers, and poets. H. Cordelia and Florence co-penned a biography of their father’s life, “Sketch of the Life of Rev. Charles B. Ray” in 1887, a year after Ray’s death. 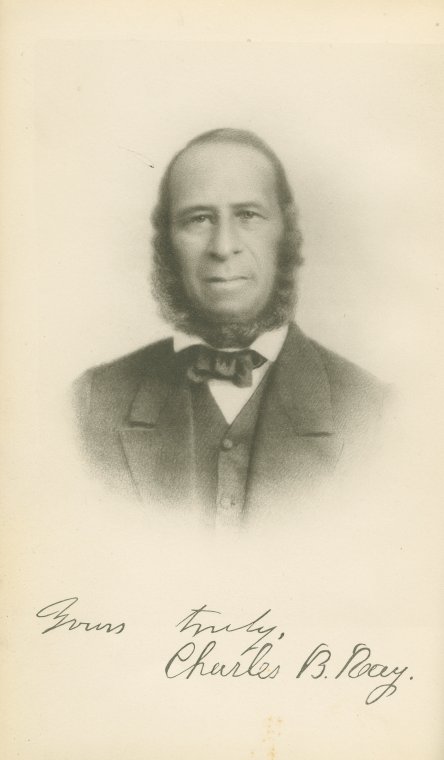 Portrait of Rev. Charles B. Ray of New York City. Ray was an active agent of the Underground Railroad, editor of The Colored American, and a well-known pastor and small business owner. Courtesy of the Schomburg Center for Research in Black Culture, Manuscripts, Archives, and Rare Books Division, New York Public Library, 1887.

Charles B. Ray became affiliated with the abolition movement and pursued business ventures through various mediums including educational attainment, newspaper editing and entrepreneurship. Ray spent his earliest years balancing his formal studies in academies located in the reportedly picturesque Falmouth village while working on his grandfather’s farm in Westerly, Rhode Island.3 Ray later studied at Wesleyan Seminary at Wilbraham, Massachusetts where he received a theological education.4 Ray entered Wesleyan University in Middletown, Connecticut in 1832 as the institution’s first African American pupil. However, Ray soon withdrew from Wesleyan U. due to white student protests and racial prejudice in 1833.5 Ray resettled in New York City where he opened the Boot and Shoemaker Shop at No. 527 Pearl Street. The shop was adjacent to the popular Pearl Street residential and business district. Before becoming a proprietor of The Colored American (1836-1842) in 1838 and editor in 1839, he worked as an itinerant journalist and subscriptions agent for the periodical, “a paper of acknowledged ability.”6 Although short-lived, the The Colored American was considered to be a predecessor of the Anglo-African and earned Ray a reputation as “a pioneer of colored literature in New York” as reported by the Californian print organ, The Elevator.7

Between 1840 and the late 1880s Charles B. Ray remained engaged in church leadership, missionary work and political activism. Strongly devoted to his theological roots while in New York, Ray worshipped with the Crosby Street Congregational Church and later pastored at Bethesda Congregational Church from 1845 to 1868. Bethesda Congregational Church occupied many edifices in New York City, including a site on Sullivan Street and another on Sixth Avenue.8 In the 1840s and 50s, Ray was involved in and founded many organizations, including the Society for the Promotion of Education Among Colored Children, New York State Vigilance Committee, American Missionary Association, the African Society for Mutual Relief, the Manhattan Congregational Association, and the Congregational Clerical Union.9 Ray represented the state of New York at several national colored men’s conventions and was a firm supporter of the Liberty Party. Also an avid supporter of fugitive slaves and their well-being, Ray worked as an agent of the Underground Railroad and held executive positions in fugitive slave conventions such as the 1850 Cazenovia Convention.10 Ray’s contemporaries include Joshua Leavitt, Oliver Johnson, Sidney Howard Gay, Arthur and Lewis Tappan, Theodore S. Wright, Rev. Henry Highland Garnet, Samuel E. Cornish, Charles L. Reason and Frederick Douglass.11 In 1886 Charles B. Ray died in New York City. He is buried in Cypress Hills Cemetery at 833 Jamaica Ave. in Brooklyn, New York.