On Election Day 2020, #DigBlk celebrated the closing of our Voting Rights Campaign series with the release of this digital exhibit featuring images from our social media component and the stories that document the long battle for the vote. If there’s one thing this campaign has shown us, it’s that the fight is never over. In the words of Angela Davis, “Freedom is a Constant Struggle.”

The Voting Rights Campaign was a cross-rank, inter-institutional collaboration. This Reflection page features blog pieces by some of the key contributors about their experiences:

Why do we vote? Is it because we are expected to or because we recognize how important it is? In the midst of a pandemic, global protests, and stories of voter suppression, how are young people engaging with politics? These are the questions I grappled with during my summer researching images for this campaign. Of course I started with iconic images such as Shirley Chisholm announcing her candidacy and the first Black politicians in the South. However, I realized I needed to step beyond the icons to truly illustrate the complex and courageous history of universal suffrage. I needed images that showed the power and determination of communities across the nation and the world. I needed stories of everyday people making a difference and building a better tomorrow. Once I moved beyond the icons and iconic images, I found stories of integrated children’s marches, shoes painted to celebrate Barack Obama’s 2008 campaign, and images of first elections in countries like Ghana and the Philippines. Finding these images clarified why we vote and continue to fight for the right to vote — to create a future where we matter.

Black Uprisings: Before we can talk about voting, we have to appreciate how Black people across the diaspora engaged in politics in many different ways. Using our platform, standing with the community, and rising against imperial systems are just some of the ways Black people have pushed for a better democracy.

Civic Engagement – Diaspora: We know civic engagement in Black history doesn’t start or stop at voting because our protests and marches made them listen even when we didn’t have the right to vote. Thinking about this long history of civic engagement, I pulled from the Colored Conventions, petitions for recognition as free citizens, voter registration maps during Reconstruction, and the Black women activists like Fannie Lou Hamer.

Civic Engagement – People of Color: Like many issues in the US, people tend to think in Black and white. When we broaden our perspective, we uncover a richer story of how Asians, Native Americans, and Latinxs also fought and continue to fight for a better democracy. From DACA press conferences to the formation of the Congressional Asian Pacific Islander Caucus, these images highlight the determination of communities of color.

Voting Suppression: While this campaign is meant to inspire, it would be wrong to craft a story of purely success. These methods of suppression remind us that the fight is not over.

Women’s Suffrage: With the anniversaries of the 15th Amendment and 19th Amendment, Black women are once again setting the record straight. Though these amendments did not protect Black women’s right to vote, we have always been politically engaged. Through clubs, marches, citizenship schools, and elections, Black women have not only fought for the right to vote but also fought to educate others on how to be an engaged citizen.

The anniversaries for suffrage victories in 2020 have been fortuitous: The centennial of the ratification of the 19th Amendment, the 150th anniversary of the passage of the 15th Amendment, and the 55th anniversary of the 1965 Voting Rights Act. With the foresight of Co-directors Shirley Moody Turner and Gabrielle Foreman, in addition to the primary image research and dataset developed by Colored Conventions Project alum Rachel Nelson with guidance by librarian Lauren Cooper, the foundation for the Center for Black Digital Research’s #VotingRights Twitter Campaign was set for success.

In collaboration with this team, in addition to Kevin Winstead and video editor Genna Zagoren, I was able to shape content based on creating community education on the history of voting rights and democracy as well as driving mobilization to complete the 2020 Census, register to vote, request absentee ballots, and vote in the 2020 election. The development of campaign content was based in both driving mobilization while staying attentive to current events in order to make posts relevant. The campaign focused on the importance of Black women in the suffrage movement, efforts for equitable democracy in the US by Black, Indigenous, People of Color and across the African Diaspora, and efforts to disenfranchise populations as well as successful campaigns against those efforts across the nineteenth, twentieth, and twenty-first centuries. The 90-day daily campaign began on August 3rd and continued until Election Day, November 3rd. 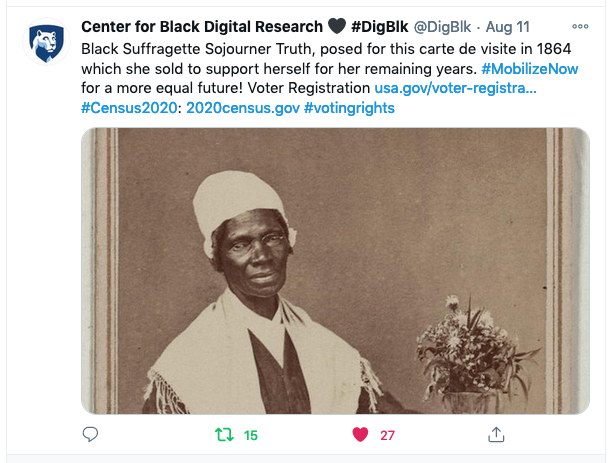 Due to the educational nature of the campaign, it was important to research each image in order to shape a story that would match with the mission of both the campaign as well as the Center. This research proved to be invaluable for both the campaign and my own learning process. Through visiting digital databases, online archives, and secondary sources, I crafted messages that centered on the work of the persons depicted and their historical importance in the fight for equality. My strategy to use one tweet to communicate the message was changed mid-campaign when it became clear that Twitter threads received more community engagement. I began with a central focus on the 19th Amendment and the central role Black women held in the fight for women’s suffrage.

One of the most difficult challenges I faced was developing a “voice” for the Center. While the Colored Conventions Project had crafted unified wording and verbiage for its tweets, I was determined to create a voice distinct for the new Center. Working with the Communications Team to determine the audience for the tweets helped me to shape the language and commitments of the #DigBlk account to drive interest and engagement. 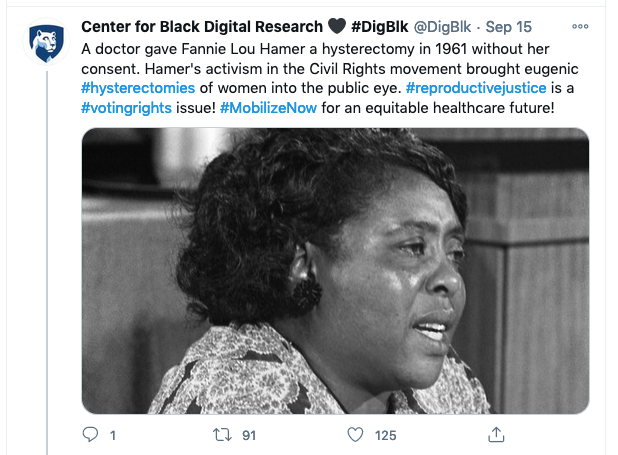 The most engaged tweet was the one connecting Fannie Lou Hamer’s story of medical malfeasance alongside the current stories of immigrant women in Georgia being sterilized without their consent in detention centers. Using history to understand our present was the most effective way to engage the public.

On August 11th, when former Vice-President Joe Biden selected Senator Kamala Harris as a running mate, I chose to shift the strategy of the campaign and focus on posts that speak to current events. I tweeted about Black women who had been selected as presidential or vice-presidential nominees such as Carlotta Bass and Shirley Chisholm in response to Biden choosing Harris. Coinciding with @CiteBlackWomen’s commitment to ensuring Black women get recognition of the work they have done, as well as the Colored Convention’s Project’s #citeblackwomensunday campaign, our Twitter campaign focused on Black women’s suffrage efforts.

The campaign picked up on the anniversary of the #19thAmendment with our first Mobilize Now video celebrating the work of Black suffragettes from the past to the present. Posts highlighting Black sororities and comics from Black magazines catapulted our followership and engagements. In September, the campaign focused on efforts to suppress the vote as well as the successes of Black suffrage despite those efforts. The continued discussions of #BlackLivesMatter and #BreonnaTaylor allowed me to focus the campaign on events in history of violence against Black people by police, politicians in the form of voter suppression, and ordinary people in the form of white supremacist violence. The most engaged tweet of the campaign was the one connecting #reproductivejustice with #VotingRights by featuring Fannie Lou Hamer’s story of medical malfeasance alongside the stories of immigrant women in Georgia being sterilized without their consent in detention centers. Using history to understand our present was the most effective way to engage the public. 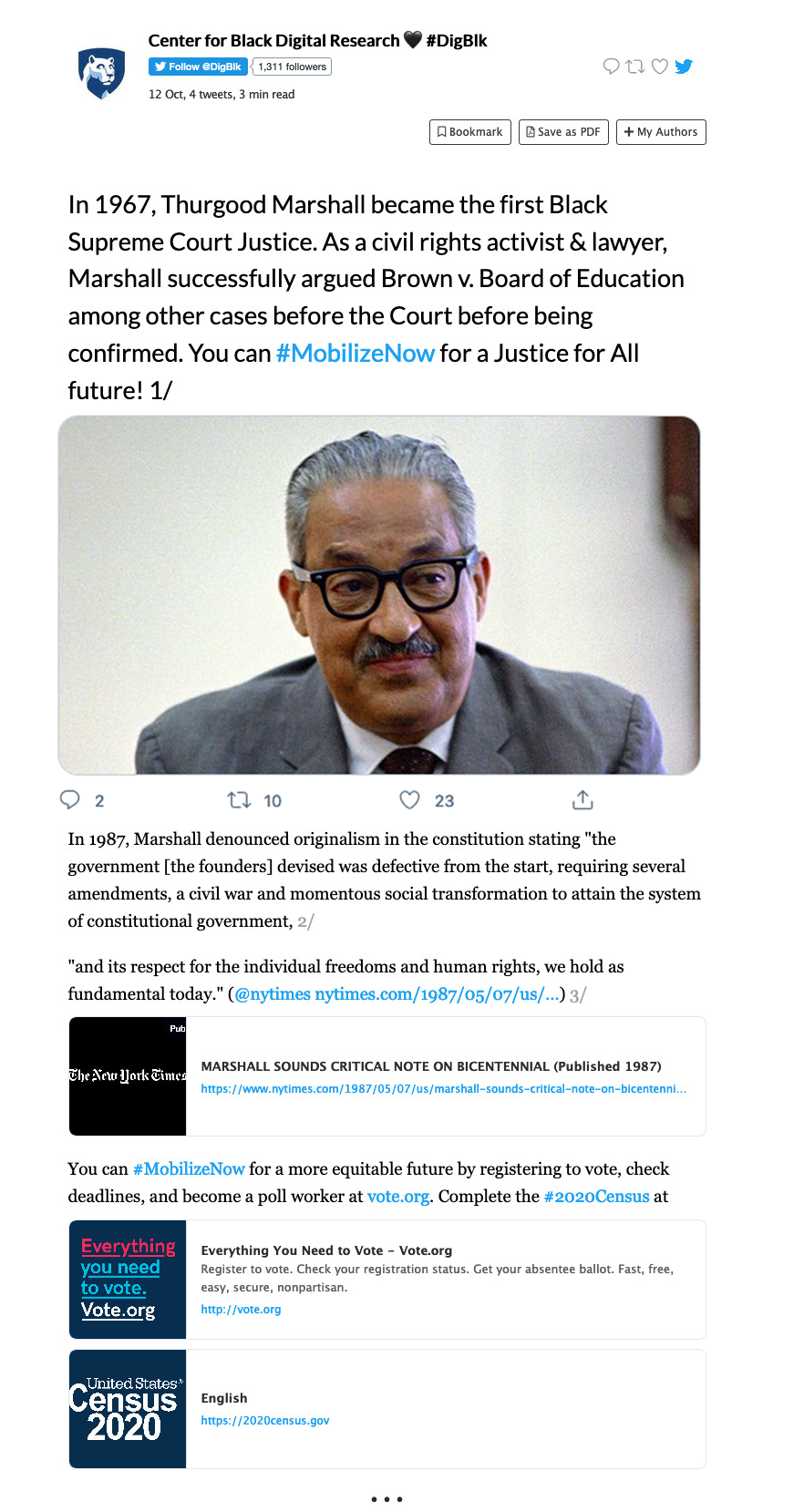 With the increased discussions of #VoterSuppression, the campaign continued to discuss successful efforts to win the vote, and campaigns to minimize the Black vote through police brutality and political means, such as poll taxes.

The commitment of the campaign to highlight Black women’s role in suffrage and democracy paid off as many of the tweets that received the most interest focused specifically on a Black woman politician. Officially closing the campaign on November 3rd allowed for a celebration of the hard work by all involved through a compilation of all five of the videos celebrating the history of voting rights and democracy in the US and across the world.

However small an impact our #VotingRights campaign had on the registration of voters or the completion of the Census, I remain proud of the efforts on all parts for the success of this campaign. Moreover, to celebrate the first Black person elected as vice-president, after recounting the history of Black voting in the US through images, was the perfect ending to this extremely emotional commitment that birthed out of love, dedication, and hard work from each person on the #DigBlk Communications Committee.

I was very excited to be brought on to the team for the #DigBlk Voting Rights Campaign as the video editor. At first, I was eager to be able to create content, but as I learned more about the campaign and worked with the team, it was much more than that.

With the help of Rachel Nelson and the team’s extensive research, I was able to create videos with pictures sorted from the archives. There was a series of five videos each with a different message and driving mobilization to vote. I was given folders for each of the videos, labeled with the focus of that archive which the video would showcase. We covered women’s suffrage, voting rights for people of color, voter suppression and voter successes, black uprisings, diaspora, all while relating to more current events. My strategy was to use every photo in the folder showing how far we have come, while showing there is still so much more to do. I would end with the more current photos from the archives while pushing for the mobilization to vote on November 3rd.

I learned so much more than I thought I would while working on this campaign. In terms of editing, I played a lot more with effects so it could add more of a watch factor for the viewer. I normally don’t do that so it was fun to learn and play with each video. But what was more important was that I learned so much about the history of voting and the ability to exercise the right to vote. For me, this would be my first time being eligible to vote, and on top of that, a major election that I got to be a part of. Working with this team made me feel a part of something so much bigger than my own singular vote and I am so grateful for that.

Meanwhile, we are amidst a global pandemic so everything is virtual. I looked forward to full team meetings bi-weekly to catch up with everyone and have a place to talk about more than the campaign. Being one of the youngest team members, I felt very welcomed despite my age, and thoroughly enjoyed talking and listening with everyone each meeting. I learned so much more from this campaign than history and power, but community and wellness as well.

I am very grateful I had very little challenges during this campaign. As an undergraduate, juggling school and other jobs, everyone made sure I had enough time to create content while also focusing on my academics and work, with little additional stress. I was given a lot of creative freedom in creating each video, which allowed me to explore a different way of sharing stories through film. I took in all the creative criticism and edits to make sure the videos captured the message it was meant to share and I am glad my work was able to do that. I am very proud of all the work the campaign has done and my little contribution to it.