Organizing in the Wake of the Second Founding 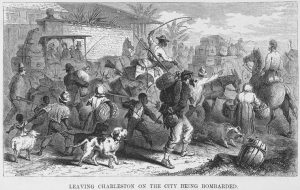 The Colored Conventions movement centered around Black collective action and pathways to citizenship and liberation. Before the Civil War, conventions were mostly concentrated in the North and Midwest. In 1865, however, Black southerners took advantage of their status as free persons and held hundreds and hundreds of conventions in the South. The Civil War and Reconstruction, as Eric Foner argues, was the United States’ second founding, as the nation remade itself through the 13th, 14th, and 15th Amendments [1]. Black activists, formerly enslaved persons, and the enslaved, however, had long been demanding and fighting for the rights guaranteed by these amendments. They articulated their demands for full citizenship in many ways, and when the war ended, Black southerners openly organized toward this goal. The Colored Conventions movement spread like wildfire nationwide. The question of mobility was even more important as Black rights became national politics and white terrorism beset the war-torn South. Nevertheless, formerly enslaved people risked their lives and newfound freedoms to organize around issues such as suffrage, education, property rights, emigration, temperance, and civil rights. Convention attendees faced many dangers traveling miles to go to conventions. The publicized calls, petitions, and proceedings of these conventions posed an even greater threat of racial violence as they exposed their politics to embittered white Southerners and former Confederates. Although attendees and delegates acknowledged the very real possibilities and realities of racial violence, they also demonstrated strength and courage by continuing the work.

Convention organizing and attendance was an assertion and practice of Black freedom and citizenship. It is in the context of Reconstruction, the Colored Conventions Movement, and Black agitation for full citizenship that HBCUs emerged in the South. These institutions are testaments to Black resilience during the most turbulent and violent period in US history.