In online sources, on historical markers, or in the books that tell the story of Talladega College, William Savery and Thomas Tarrant’s roles in the 1865 Alabama Colored Convention are the first mentioned [1]. Despite this, the roles of white leaders and institutions such as General Wager T. Swayne of the Freedmen’s Bureau and the American Missionary Association are more prominently emphasized. Although the college honors William Savery by naming its library after him, his life and work remain understudied. The same could be said about Thomas Tarrant and Ambrose Headen. This difficult task of locating their biographies and activism reinforces their marginalized positions. School films, the university’s websites, and building plaques fail to recognize these men as primary actors in the founding of the institution by centering the work of white missionaries. 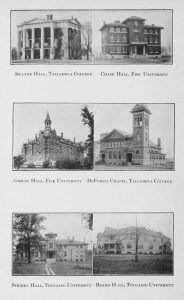 Buildings at historically Black colleges founded by the AMA in Alabama, Mississippi, and Tennessee

College catalogs between 1870 and 1877 show William Savery and Ambrose Headen were both on the Board of Trustees [2]. Less than five years out of slavery, being on the governing board of the college highlights their significance to the institution’s founding, especially when the instructors were all from the AMA. Still, the institutional history in these catalogs ignore Black people’s centrality in the college’s founding, stressing instead that “for several years past, various Northern Aid Societies have been engaged in an educational work in Alabama” [3]. Catalogs go on to discuss Swayne Hall and to assure parents that morality and good conduct will be enforced. The 1871 catalog, however, does not mention William Savery, Thomas Tarrant, or Ambrose Headen. Erasing Black activism and self-determination and celebrating white heroes of racial justice is not new. The AMA is credited with founding several HBCUs in the South which prompts this question: to what extent are Black founders written out of other HBCU histories?

Black newspapers such as the Pittsburgh Courier have reported on the work and contributions of William Savery.  The paper’s acknowledgement of Savery was spurred when plans for the Savery Library were made public.  In 1854, the Alabama Tribune ran an article about  Brown v. Board of Education (1954). The landmark decision of the Supreme Court declared segregation in public schools unconstitutional—“ironically,” the article notes, 100 years after “the first Negro college [was] implanted on U.S. ground” [3]. It further notes the achievements of HBCU founders, including “William Savery, then a slave, labored diligently to erect [Talladega College], lived to see three of his children receive diplomas” [4].

More recently, the podcast Seizing Freedom tackled the life and work of Ambrose Headen. The episode reimagines Headen’s point of view through a first-person monologue. Listen to the episode below:

[3] Circular of the Normal and Preparatory Departments of Talladega College, p. 9.