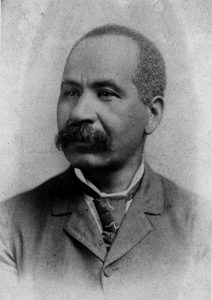 Thomas De Saille Tucker, first president of Florida A&M University[/caption] Thomas De Saille Tucker served as the institution’s first president until 1903. Tucker was born o July 21, 1844 in Sierra Leone and immigrated to the United States in 1856 [1]. He enrolled in Oberlin College’s Preparatory Department in 1858 and graduated from the College Department in 1865. He taught in common schools in Kentucky and Louisiana but left teaching to study law at Straight University (which later merged with New Orleans University to become Dillard University) [2]. After graduating in 1882, he was admitted to the bar in Florida [3]. The Black Floridian community had great faith in him; a Pensacola’s Southern Leader article states, “He is a strong man morally and intellectually and the new normal school has security under his charge” [4]. He was instrumental in securing land and dormitories for the students so, and under Tucker’s tenure, the institution moved from Florida State University’s campus to its own location in Tallahassee in 1888 [5]. 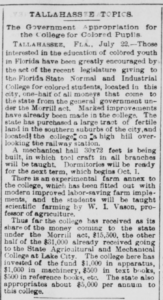 During the 1888-1889 school year, Miss Laura L. Clark, graduate of Wilberforce, was elected second assistant and was instructor of English and literary subjects in the preparatory department. Records show her salary was $700 compared to Gibbs’ $1000 and Tucker’s $1100 [6]. While it is unclear the circumstances under which Clark left, the 1890-1891 catalog shows Ida A. Gibbs took over her position as well as the principalship of the Preparatory Department. Here, again, we see the long-rooted and deep connections between the Gibbs family and one of the most important Black educational institutions in the South.