​FOR GENERATIONS TO COME: SOUTHERN HBCUS AND THEIR COLORED CONVENTIONS ROOTS 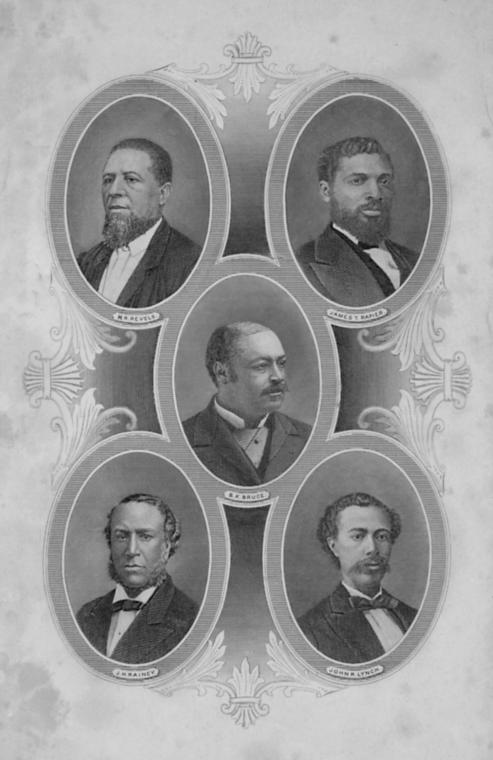 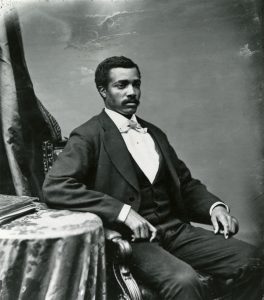 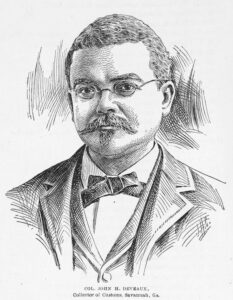 John H. Deveaux was the founder of the newspaper Colored Tribune. It was forced to fold in 1878 after only three years, but it reopened as the Savannah Tribune in 1886 [1]. He held several public office positions, including Savannah’s custom house clerk and collector of Savannah and Brunswick, Georgia. He also served as colonel in the state militia.
Edwin Belcher was a former Union army officer and Freedmen’s Bureau agent. In 1873, Ulysses Grant nominated Belcher to be the deputy postmaster of Macon, Georgia [2]. He held this office from 1873 to 1875. After a much contested election, in which whites refused to seat elected African Americans in the state legislature, Belcher maintained his seat [3].
James Merilus Simms was a minister of the First Colored Baptist Church. In 1863, he was fined for teaching enslaved children, which was illegal in Georgia [4]. For this he was also publicly whipped. After the war, Simms, undettered by white violence, mobilized Black men to vote and held public office. In 1868, he testified before the US Congress about the terrorism white Georgians unleashed during the presidential election in the same year[5] During the Georgia General Assembly in 1890, Simms presented a resolution to create a normal school for Black Georgians. The Georgia State Industrial College for Colored Youths was thus established. The institution stands today as Savannah State University [6].
Henry McNeal Turner
Charles L. Bradwell was a formerly enslaved person-turned-minister. He was among the many Black men who met with Secretary of War Edwin Stanton and Major General William T. Sherman in an 1865 assembly to discuss securing education for Black Georgians. At the time, he had been a preacher of the Methodist Episcopal Church [7]. Along with Turner and other ministers, Bradwell actively participated in the African Methodist Episcopal Church’s general conferences.
William Henry Noble was an African Methodist Episcopal Church pastor. He succeeded Henry McNeal Turner’s pastorate at St. Philip’s Church in Savannah [8]. He was among the elected officials expelled from the legislature by whites in 1868.
Tunis G. Campbell was a Black businessman from New York who served in the Union military and also as a Freedmen’s Bureau agent [9]. Toward the end of the war, he was appointed as military governor of the Sea Islands in Georgia. He was elected into the Georgia Senate in 1868 and his son, Tunis G. Campbell Jr., was elected as state representative in the same year. Unlike Edwin Belcher, the Campbells were forced out. In 1871, Campbell ran again and kept his seat as state senator. 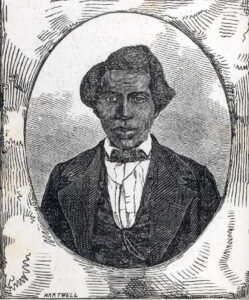 L. W. West encouraged and mobilized Black men to vote in Georgia. In 1880, he published “An Address to the Colored Men of Savannah, Georgia,” in which he urges Black men to “Rally to the pools [sic, polls] for once in your life and be men. Make sacrifices to show your manhood, and all classes of people will respect you – not only at home, but abroad. We demand representation in the city government, not on account of color, but as a matter of justice” [10].
John F. Quarles was a lawyer, consul, and politician. As a formerly enslaved person, he defied Georgia law to teach enslaved children [11]. After the war, Quarles studied law at Westminster College, Pennsylvania and “graduated at the head of his class” In 1870, Ulysses Grant appointed him as US consul at Port Mahon, Spain. At the end of his tenure in 1876, he requested to be reinstated, and Frederick Douglass and several others wrote a recommendation on his behalf: “Mr. Quarles is the only colored man holding such position in this branch of foreign service and this he not only represents his state, but we regard him in a peculiar sense as the representative of the colored people of the country I this branch of public service” [12]. He again served as consul and returned to the US. In 1880, he was admitted to the bar in New York [13].
William H. Harrison was an elected state legislator and a formerly enslaved person. Like many other elected officials, Harrison was refused his seat in 1868.
William A. Golden was also a pastor and elected official, representing Liberty County. He too was expelled out of the legislature in 1868. He and the others were reseated by an act of Congress in 1870. He was again elected to represent the same county between 1873 and 1874 [14]. 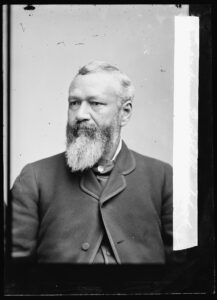 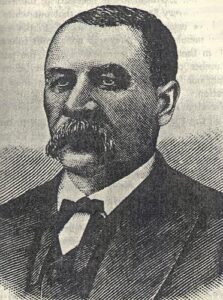 Isaac Myers was a labor activist, organizer, and founder. When white carpenters excluded Black workers and refused to work with them, “Isaac Myers, along with others, established a black-owned shipyard, the Chesapeake Marine Railroad and Dry Dock Company” [1]. He also served as the president of the Colored Caulker’s Trades Union Society of Baltimore, serving the interests of Black caulkers, who were often turned away at the Baltimore waterfront. In 1869, he called to order the Colored National Labor Convention, and “with strong support from Frederick Douglass, he organized the first national federated union of black workers, the Colored National Labor Union (CNLU)” [2]. Myers and members of the CNLU, including John Mercer Langston, worked to galvanize Black workers in various states [3]. He also attended the National Convention at New Orleans, Louisiana, in 1872. His son, George A. Myers, was a barber and community leader in Cleveland [4]. 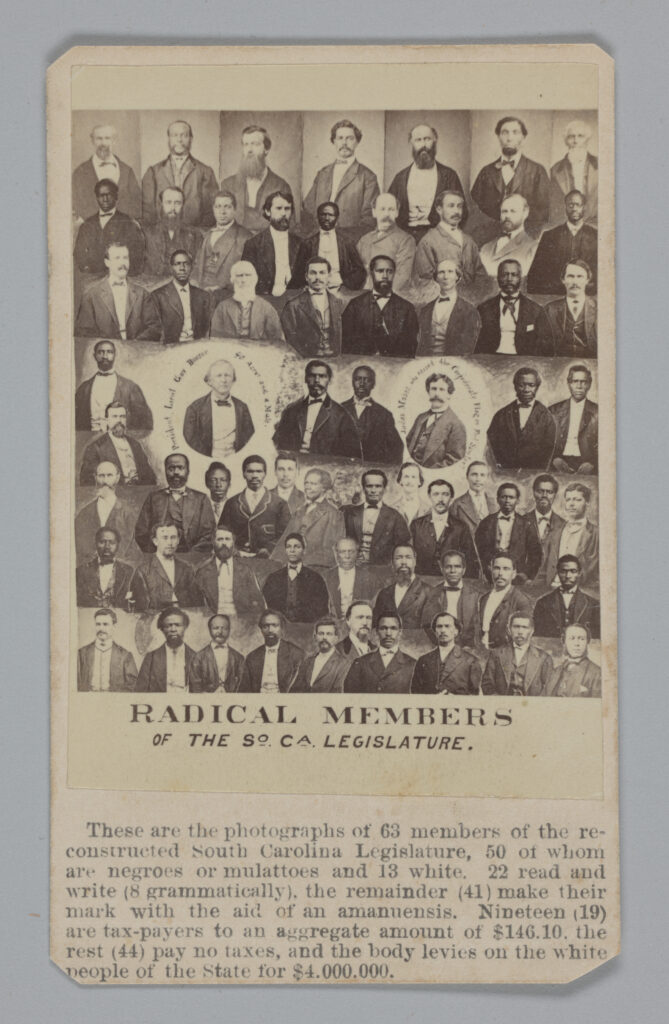 Radical Members of the South Carolina Legislature, Collection of the Smithsonian National Museum of African American History and Culture.

Richard H. Cain a missionary of the African Methodist Episcopal Church appointed to South Carolina. There, he actively participated in Reconstruction politics. He was elected both to the state senate (1868-1870) and US House of Representatives (1873-1875).
Alonzo J. Ransier was South Carolina’s first Back lieutenant governor, defeating an ex-Confederate candidate in 1870. Prior to that, he served as a member of the state’s House of Representatives. In 1873, he was elected as member of the US Congress.
Robert Brown Elliott was a state representative (1868-1870) and assistant adjutant general of South Carolina (1869-1870). He also served two terms in the US Congress. Elliot was well-educated and a highly skilled orator. More radical than his peers, he fearlessly condemned the white terrorism, relentlessly urged Congress to protect Black civil rights, and argued against restoring the political rights of ex-Confederates [1].
Wilson Cooke Like many of the Black South Carolinian delegates at the 1871 convention, Cooke was also an instrumental Black delegate at the 1868 Constitutional Convention of South Carolina. He was elected to the South Carolina House of Representatives (1868-1870), representing Greenville County. His son, William Wilson Cooke, was the first Black person to be employed at the United States Treasury Department, working as its supervising architect [2].
William J. Whipper was the nephew of businessman, colored conventions organizer, reformer, and activist William Whipper. William J. Whipper served in the Union army, was a lawyer, judge, and state legislator. Considered to be more revolutionary than his peers, Whipper urged delegates at the 1868 Constitutional Convention of South Carolina to amend the suffrage clause to include women. Alrutheus Ambush Taylor writes that Whipper “considered it unjust, contemptible and wrong to deprive these intelligent beings [women] of the privileges that were common to men” [3]. Whipper was married to women’s rights and Black rights activist, writer, and teacher Frances Rollin, who wrote The Life and Public Services of Martin R. Delany under a male pseudonym.
Benjamin A. Boseman was a physician who earned his degree from Maine Medical College. Boseman moved to Charleston shortly after the war. There, he carved a career as a politician, serving three terms in the state’s House of Representatives. He was also appointed as a member of South Carolina College’s board of trustees.
Joseph H. Rainey was a formerly enslaved person who was forced to work on Confederate fortifications until he freed himself. He fled with his wife to Bermuda and came back to South Carolina after the war. Right away, Rainey participated in Reconstruction politics, serving as a delegate at the 1868 constitutional convention. He is better known as the first Black man to serve in the US House of Representatives. Among the conventions Rainey attended were Colored National Labor Convention, held in Washington, D.C., 1869, and National Conference of Colored Men of the United States, Held in the State Capitol at Nashville Tennessee, 1879.
Henry E. Hayne was the first student of color to enroll at the University of South Carolina. Upon his admission, three professors resigned. The university’s board of trustees accepted their resignation and declared that Hayne was “ a gentleman of irreproachable character, against whom said professor can suggest no objection except, in their opinion, his race” [4]. The board subsequently declared to allow African Americans into the university. In 1877, Democrats closed down the school and reopened it three years later as South Carolina College of Agriculture and Mechanics, a whites-only institution [5]. Prior to the Democratic takeover of the state, Hayne was elected to the state legislature in 1870 and served as the state’s Secretary of State in 1872.
William Beverly Nash was highly active in the Colored Conventions movement. Among the many conventions he attended were Colored People’s Convention of the State of South Carolina in 1865; National Convention at New Orleans, Louisiana, 1872; and Conference of Colored Citizens, held at Columbia in 1876. Nash was elected to the state senate in 1868.
Samuel J. Lee was South Carolina’s first Black speaker of the house. An Independent Republican, Lee competed with Rainey for public office in the 1870s. Lee was also a successful lawyer in Charleston and served as general of the state colored militia in 1891 [6].
John White
Frank Williamson

Andrew J. Flowers In 1870, Flowers was elected as Chattanooga’s justice of peace [1]. Klansmen subsequently beat and whipped Flowers for winning. He testified before a congressional hearing in 1871, seeking to address the lawlessness and violence of white terrorists in the South. 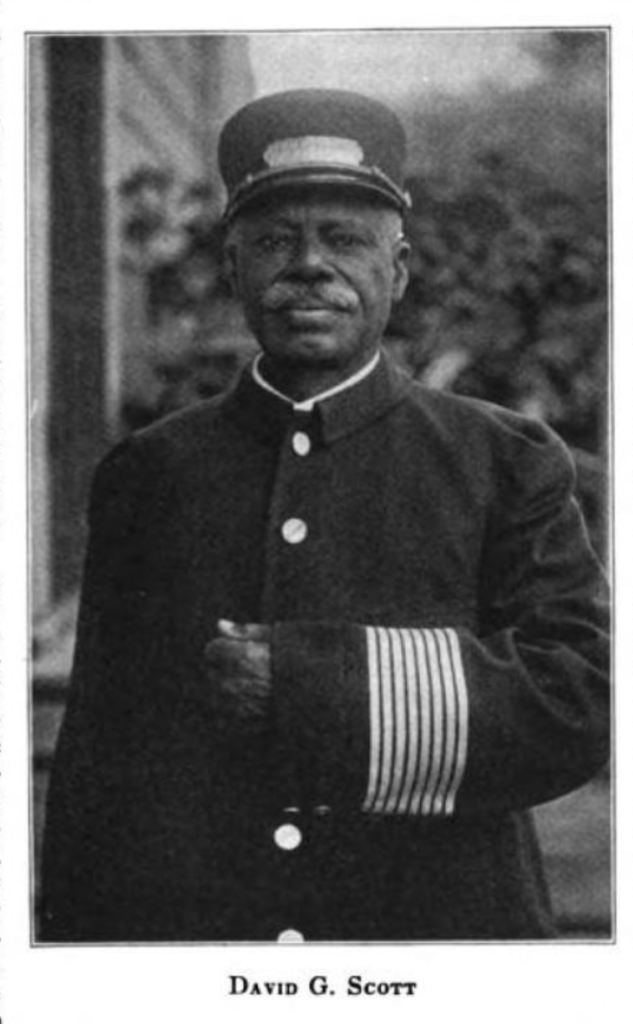 David G. Scott’s retirement was celebrated in an article in the Pullman News in 1922.

James Green
J. H. Townsend is possibly the same J.H. Townsend who attended and served as a delegate at the First State Convention of the Colored Citizens of the State of California, 1855.
J. DeBruhl
David G. Scott was a Union army veteran. He moved to Houston in 1870, working as a Pullman porter. Through this work, he supported the education of his brother, Reverend B. Scott of the Methodist Episcopal Church, who was the first Black president of Wiley College and editor of the Southwestern Christian Advocate in New Orleans, Louisiana [1].
Richard Allen was a legislator, representing Harris and Montgomery Counties. He also participated in several National Republican Conventions after the war. He attended the Convention of Colored Citizens in Texas, 1873, and presided over the Conference for the Colored People of Texas, 1879.
Richard Nelson served as a justice of peace in Galveston. Nelson established the only Republican paper in Galveston, the Galveston Spectator (1873–1885). It was “the earliest newspaper in the state with black ownership and management” [2]. He also published the Freeman’s Journal (1887–1891)

Thomas A. Sykes forged a political career in both Tennessee and North Carolina. He was a member of the Tennessee Legislature from 1877 to 1879 and from 1881-1883, representing Davidson County in both terms. Prior to moving to North Carolina, he was elected to the North Carolina House of Representatives for four terms. The Democratic takeover of the South left Black legislators with limited options and compelled them to strategize differently. Rather than challenge segregation outright, Sykes demanded that if segregation be the law, public funds must be expended as well on separate institutions and accommodations for Black persons. Advocating for public aid, he introduced a bill “which provided segregated accommodations for blacks at the Tennessee School for the Blind in Nashville and the School for the deaf in Knoxville” [1]. He also took charge of the department for African Americans of the segregated Tennessee Industrial School. In Tennessee, Sykes “introduced two more bills to an discrimination against blacks in jury selection and to admit black students to the University of Tennessee,” but they “were tabled in committee and never came to a vote” [2].