Women and the Convention 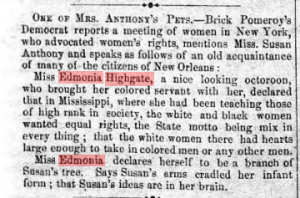 Born in 1844 to Charles and Hannah Francis Highgate, Edmonia Highgate was the first known Black person to graduate from Syracuse High School with honors in 1861. Highgate received a teaching certificate through the Syracuse Board of Education where she migrated South to teach through the American Missionary Association (AMA) where she organized the Louisiana Educational Relief Association for Black children.(4)  Highgate wrote for the Christian Recorder as well as the American Freedman. Despite her passion for teaching, Highgate became emotionally and physically drained from the teaching conditions in the South. In a letter to George Whipple on June 1, 1864, Highgate expressed “so many of my people who have spent most of manhood’s and womanhood’s freshness in slavery” that have caused “peculiar crushing emotions which, at first, check even my utterance.”(5) Highgate also experienced trauma through the 1866 New Orleans Massacre as well assisting Southern Black soldiers and white hostility. (6) The 1866 New Orleans Massacre took place on July 30 as a result of white Democrats and police attacking Black Republicans at the Mechanics Institute. Black Republicans gathered in this space during the Louisiana Constitutional Convention to discuss and denounce the newly passed Black Codes and exclusion of voting rights for Black men. The massacre left over 150 people killed, with 34 of those killed being Black. (7) Highgate wrote a letter to that was published in the 18 August 1866 Recorder titled “New Orleans Correspondence” where she described how the massacre influenced her decision to leave. (8) Though it’s rarely taught or cited, Highgate also published a serialized novel in May of 1865, Congojoco, in the Christian Recorder. (9) Unfortunately, Highgate had an early and untimely death in 1870. We see through obituary statements and letter from family members in the New Orleans Republican that Highgate was highly valued as a teacher and orator of her time.

[1] Address of the Colored National Convention to the People of the United States,” Proceedings of the National Convention of Colored Men, Held in the City of Syracuse, N.Y., October 4, 5, 6, and 7, 1864, with the Bill of Wrongs and Rights, and the Address to the American People ([Boston]: Printed for the Convention, 1864)