The last known convention where Harper spoke was the Convention of Colored People in Dover, Delaware in 1873. Pertaining to themes of education, suffrage, and racial uplift, the proceedings record Harper as “being present was invited to address the Convention. She spoke in eloquent terms of the efforts of the colored people, and hoped they would not cease until equal rights were in fact within the reach of all.” Following the adoption of the address, “the convention was entertained by Mrs. F.E.W Harper , in reading her excellent poem entitled ‘Sketches of Southern Life.’” While the proceedings record a substantial amount of information, we can find even more highlights of Harper’s speech through various newspaper covering the convention. 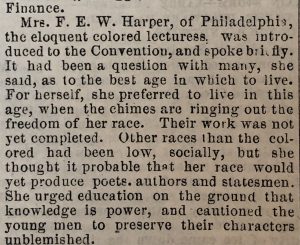 “She urged education on the ground that knowledge is power, and cautioned the young men to preserve their characters unblemished.”

The Delaware State Journal situates Harper’s speech in relation to social and political climate during that time. The article identifies Harper as “the eloquent colored lecturess.” Harper’s speech tackles the question “as to the best age in which to live.” Harper responded to this question by stating “she preferred to live in this age, when the chimes are ringing out the freedom of her race. Their work was not yet completed. Other races than the colored had been low, socially, but she thought it probable that her race would yet produce poets, authors and statesmen. She urged education on the ground that knowledge is power, and cautioned the young men to preserve their characters unblemished.”

The Wilmington Daily Commercial also covered the 1873 Convention speech, emphasizing how Harper “explained the necessity of education, and appealed to her people to arouse themselves to meet this important issue, to be earnest, to be firm and untiring in their efforts, until the good is reached by all.” Harper’s speech at the 1873 speech uplifted Convention attendees through her encouraging words to present and future generations despite the ongoing fight for civil rights. While this may have been Harper’s last-known speech at a Colored Convention, Harper continued to give lectures and fight for civil rights and women’s rights across the United States until her death in 1911.