Following the death of her husband Fenton Harper in 1864, now Frances Ellen Watkins Harper returned to the lecture circuit immediately not only to continue influencing audiences but as a way to provide for Fenton Harper’s children from a previous marriage as well as their daughter Mary Harper. Harper’s presence at the 1864 Syracuse, NY Convention is reduced to one line the proceedings: “Mrs. Frances Ellen Watkins Harper was then introduced, and spoke feelingly and eloquently of our hopes and prospects in this country.” While the proceedings provide more detail than previous proceedings recording Black women’s presence, the description of Harper’s speech is still reduced especially in comparison to male counterparts. Thankfully we have additional coverage from newspapers to gain an understanding of what Harper may have discussed in the 1864 Convention. 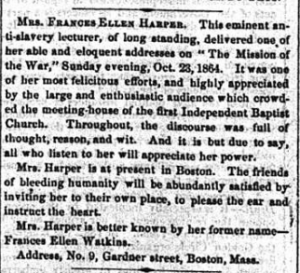 One of Harper’s common speeches in 1864 was entitled “Mission of the War.” A few weeks after her appearance at the 1864 Convention, The Liberator covered a speech Harper gave at the Boston Independent Church with this same title. The article opens by stating “this eminent anti-slavery lecturer, of long standing, delivered one of her able and eloquent addresses on ‘The Mission of the War,’ Sunday evening, Oct. 23, 1864.” Once again, we see another article that emphasizes the “large and enthusiastic audience which crowded the meeting-house of the first Independent Baptist Church.” While the article does not go into detail about what Harper said, the title of the speech alludes to Harper’s views on the Civil War. The emphasis on the size of the audiences for these articles highlights Harper’s popularity, influence, and impact on discussion pertaining to slavery and the Civil War. The fact that people gather in large crowds reveals Harper’s long-standing status as a prominent lecturer especially as a Black woman in the 19th century.

“This eminent anti-slavery lecturer, of long standing, delivered one of her able and eloquent addresses on ‘The Mission of the War.'” 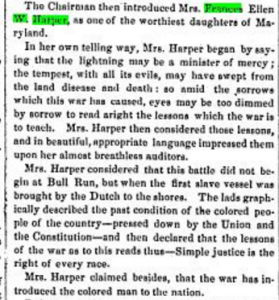 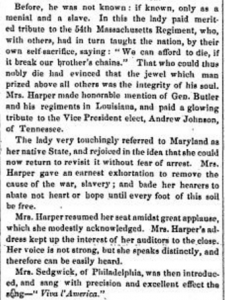 Later that same year, The Liberator covers Harper’s presence at the “Celebration of Freedom in Maryland” on November 28th, 1864. Harper uses metaphors to describe the lessons of the war, arguing on “the lighting may be a minister of mercy, the tempest, with all its evils, may have swept from the land disease and death; so amid the sorrows which this war has caused, eye may be too dimmed by sorrow to read aright the lessons which the was is to teach.” Harper asserts “that the war has introduced the colored man to the nation”, alluding to the 54th Massachusetts Regiment, an infantry regiment of African American soldiers fighting for the Union during the Civil War. As the war came to close, Harper acknowledged that she could “return to revisit [Maryland] without fear of arrest” due to the Fugitive Slave Act. The lecture at the Celebration of Freedom Maryland provides a strong sense of Harper’s possible speech at the 1864 Convention. We can imagine Harper discussed the war, the participation and importance of Black soldiers, and the lessons we can learn from the war as a nation.