Before heading to Kansas in an attempt to help prevent the spread of slavery into the state and surrounding areas, Brown went to Syracuse, “bent on raising funds at the organizational meeting of the Radical Abolitionist Party” [1]. 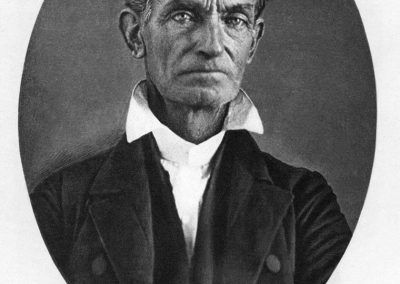 This inaugural Convention of Radical Abolitionists took place from June 26 through June 28, 1855 in Syracuse, New York. At this point, three of Brown’s sons were already in Kansas waiting for him. At the convention, Brown “appealed for money and guns to take him to Kansas.” His speech was effective and swayed many of the members of the audience, since “most members agreed that armed resistance was the only course left to the friends of freedom in Kansas.” Douglass then asked for contributions to the cause, which resulted in a monetary donation of $60 and some guns [2].

One of the members of the Chatham Convention, John A. Thomas, attended and was a member of the Finance Committee at the 1855 abolitionist convention (listed as John Thomas on that convention’s minutes). Thomas was a self-liberated individual from Maryland who took refuge and settled in New York. He established a farm with land deeded to him by Gerrit Smith, a member of the Secret Six – a group of six men who were some of Brown’s chief financial backers. Thomas’s involvement in the 1855 abolitionist convention and the Chatham Convention highlights the importance of the convention movement to interracial activist networks [5].

In an editorial written after the 1855 abolitionist convention, Douglass “spoke of Brown as an active and self-sacrificing abolitionist who had presented his case most feelingly.” Brown then used the money raised to travel to Springfield “to purchase firearms and flasks” for the fighting in Kansas [6].

Although Brown’s impassioned appeals seem to have affected the audience of the convention, when Brown “finally entered the [Kansas] territory on October 4, 1854, he was accompanied only by his son, Oliver, and his son-in-law, Henry Thompson” [7]. 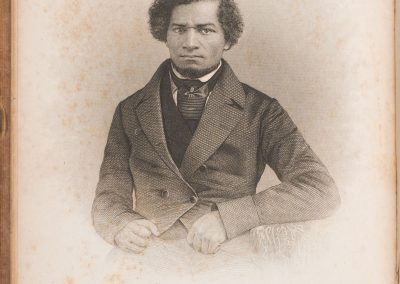 A portrait of Frederick Douglass published as the frontispiece to My Bondage and My Freedom, 1855. Image courtesy of The University of Texas at Austin. 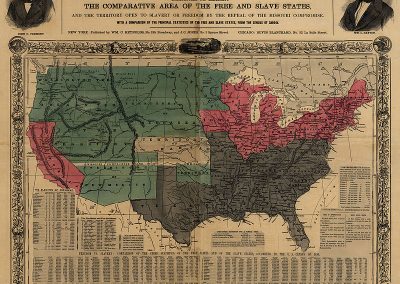 Reynolds’s Political Map of the United States, c. 1856. The Kansas Territory, in the center, is colored in white. Slave states are colored grey, Free states in pink, and territories in green. Image courtesy of Library of Congress Geography and Map Division via Wikimedia Commons.

This group also advocated for African American rights, such as citizenship, women’s suffrage, Native American rights, “and even believed in the redistribution of political power and resources” [8].

Since “Radical Political Abolitionists saw themselves as part of a crusade,” they believed that the use of violence to combat injustice was not only justified, but divinely sanctioned. If political means for combating slavery failed, “violence was available” [9].

James McCune Smith, one of the party’s founders, stated “that they intended to abolish slavery ‘by means of the Constitution or otherwise.’” To make sure his point was heard loud and clear, McCune Smith later told Gerrit Smith, “should there be any quarrel in the future as to the meaning of [or otherwise], I mean fight” [10].

The Radical Abolitionist Party fully backed Brown in his battles in Kansas and the Harpers Ferry Raid by collecting donations. The party, in advocating for the immediate, and, if necessary, militant overthrow of slavery, “saw itself as ‘the only political party in the land, that insists on the right and duty to wield the political power of the nation for the overthrow of every part and parcel of American slavery’” [11].

The Radical Abolitionist Party, from its founders through its multi-racial membership, was one of the organizations that carried Black ideas about freedom and citizenship not only to free and enslaved peoples, but also directly impacted John Brown’s political thought and practice.