On May 8 and 10, 1858 in Chatham, Canada West, about thirty-three Black North Americans and twelve whites met with John Brown to discuss plans to overthrow “the infernal institution” of slavery [1]. 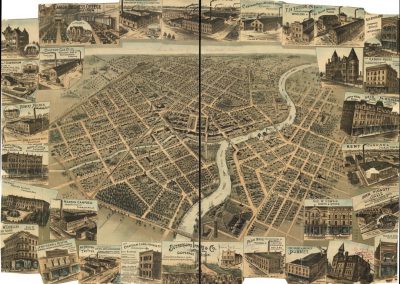 At the Chatham Convention, these men worked together as part of an interracial collective to “draw plans for a new provisional government” in the United States [3].

In the convention, delegates read and debated Brown’s “Provisional Constitution and Ordinances of the People of the United States,” which consisted of forty-eight articles pertaining to the formation of a new, independent nation. These articles pertained to “the abolition of slavery, full black citizenship, [and] the election of black officials…” [5] , [6] , [7].

Over the course of the convention, delegates adopted the “Provisional Constitution” and elected officers for the future provisional government. Anderson and A.M. Ellsworth were elected as members of Congress; white British poet Richard Realf as Secretary of State; Owen Brown as Treasurer; and white activist George B. Gill as Secretary of the Treasury [8].

Not only did Black men attend the Chatham Convention, they were active participants, helping run the meeting and being elected to offices in the future provisional government in ways that underscore the importance of their influence on Brown and there support of him as well.

With the Chatham Convention, Delany—who helped Brown organize the convention and worked as a recruiter for Brown—and Brown “brought together men of both races in a common purpose, operating with complete unity and equality” [9] , [10].

“The Provisional Constitution.” Image courtesy of The National Archives of the United States.

Explore the subtabs related to the Chatham Convention to:

[1] There is scholarly debate about the exact number of people who attended the Convention, but there is a consensus that the majority were Black American men.

[2] Mary Ann Shadd Cary was the first African American woman to publish and edit a newspaper in North America. For more information on Shadd Cary, see her subtab under the Biographies tab.

[5] For more information on the “Provisional Constitution,” see its subtab.

[9] Toledo, Gregory. The Hanging Of Old Brown: A Story Of Slaves, Statesmen, And Redemption. Praeger, 2002, p.