Newspaper Coverage Of The Raid

The Harpers Ferry Raid made national news, with newspaper coverage in the North, Midwest, and the South.

Below you can read excerpts of some of the coverage on the raid from the Liberator (Boston, Massachusetts), the Vermont Chronicle (Bellows Falls, Vermont), The Omaha Nebraskian (Omaha, Nebraska), The Frankfort Commonwealth (Frankfort, Kentucky), the Richmond Enquirer (Richmond, Virginia), and the Daily Herald (Wilmington, North Carolina).

In the article “Attempted Negro Insurrection in Maryland,” published in The Omaha Nebraskian, Saturday, October 29, 1859, issue 41, the authors reported on information gathered from their dispatches from various locations such as Baltimore, Maryland and Washington D.C. 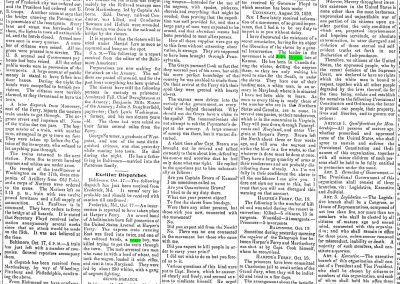 A dispatch from Baltimore, on October 18, reads: “The insurrectionists are commanded by Capt. Brown of Kansas notoriety. They numbered originally, seventeen white men and five negroes, several of whom were shot” [1].

Another dispatch printed from Harper’s Ferry, on October 19, focused on Brown and his men’s actions before the raid, including their stay at Kennedy Farm, and directly quoted some of Brown’s “Provisional Constitution And Ordinances Of The People Of The United States,” a copy of which was found at Kennedy Farm after the raid [2].

“A strange insurrectionary movement at Harper’s Ferry, is the event of last week. It commended on Sunday night and ended on Tuesday, with the death of most of the insurgents and the capture of others. The leader was John Brown, known in the history of the Kansas troubles as ‘Ossawatomie [sic] Brown,’ who seems to have acted under the strangest madness and delusion” [3].

In “Harper’s Ferry Insurrection,” published in the Liberator on November 11, Granville Sharp provided a much different view of Brown, praising him:

“Whatever may be thought of the wisdom or the expediency of the undertaking of John Brown, in contemplation of the probable result of it, there can be no doubt he was actuated by the noblest and most philanthropic motives that can dignify our nature is engaging in it, viz., the liberation of the slaves” [4]. 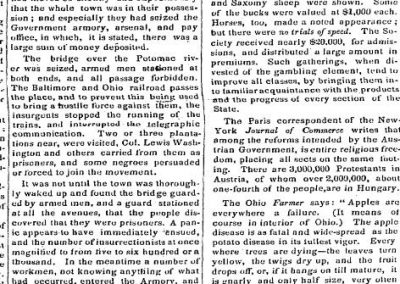 Article entitled “Harper’s Ferry Insurrection” by Granville Sharp, published in The Liberator, Friday, November 11, 1859, pg. 179, issue 45. In this article, Sharp praises Brown as being moved by “the noblest and most philanthropic motives.” Sharp asserts the the raid was “a noble struggle for liberty,” not “a vile attempt at insurrection.” Courtesy of 19th Century U.S. Newspapers.

Like Garnet, Brown, and others, Sharp stated that “the slaves are perfectly justified by the laws of God and man in endeavoring to obtain their liberty by force and violence, if they can obtain it in no other way. And if they have this right, others are justified in assisting them in these endeavors” [5].

“The Insurrection at Harper’s Ferry,” published in The Frankfort Commonwealth on October 21, included the names of those killed and involved in the raid, as well as the larger impacts of the raid.

The article began with the statement: “the details by Telegraph of the insurrection at Harper’s Ferry take up so much space as to prevent their publication in our paper” [6].

The author(s) then provided their own summary and perspective on the events:

“The developments indicate a conspiracy on the part of a few Abolitionists to revolutionize the entire South by inciting an insurrection among the slaves, which conspiracy, however, we cannot but believe existed chiefly upon paper, and in the minds of a few zealots, whose acts prove them to have been stark mad. In fact, derangement alone can account for their preposterous attempt to effect a revolution in the Slave states with only 50 men, with the illusory hope, it is true, that the unarmed and undisciplined slaves would rise and successful strike for their liberation” [7].

“The Harper’s Ferry invasion has advanced the cause of Disunion, more than any other event that has happened since the formation of the Government; it has revived, with ten fold strength the desire of a Southern Confederacy” [8].

The October 26 issue of The Daily Herald, like the October 21 issue of The Frankfort Commonwealth positioned the raid as an event that enslaved peoples wanted nothing to do with:

“Twas no insurrection, and it is libel upon the slave in designating it as such. They had nothing whatever to do with it. There was not a single slave engaged but what was drawn in by compulsion. The original insurgents consisted of some fifteen or sixteen white men and a half dozen free negroes from the North – brought there by old Brown” [9].

As seen from just these examples, reactions to the raid ranged from surprise and indignation, approval and praise, anger, and reaffirmation of white supremacy.