Explore this section and its related subtabs to learn more about Black radical influence on Brown, specifically: Henry Highland Garnet’s shift to a more radical abolitionist politics from 1842 to 1843, Brown’s meetings with Douglass in Springfield, MA, Loguen’s influence on Brown in the 1840s, as well as Brown and his involvement in the Radical Abolitionist Party [1], [2], [3]. 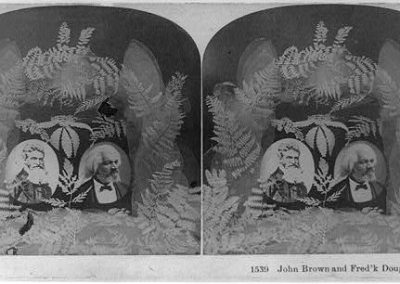 The Radical Abolitionist Party is perhaps one of the groups that most influenced Brown. It consisted of a group of Black and white abolitionists who came together in response to the Kansas-Nebraska Act [4].

This group was a direct descendant of the Liberty Party, which was composed of Frederick Douglass, Jermaine Loguen, James McCune Smith, Gerrit Smith, John Brown, and Lewis Tappan. This short-lived party “had moderate success in the 1840s,” and advocated that the best options for overthrowing slavery were through politics [5].

The Radical Abolitionist Party took an offensive rather than a defensive stance towards slavery. This party “was not only concerned with black liberation but also with addressing the needs of oppressed peoples everywhere.” This group believed that moral suasion was no longer an option—instead they “openly embraced the idea of insurrection and the efforts of John Brown” [6].

Indeed, the Radical Political Abolitionists supported Brown’s missions in Kansas and the Harpers Ferry Raid, both through ideological support and funding [7].

Explore this page’s subtabs to learn more about:

[4] Jackson, Kellie Carter. Force And Freedom: Black Abolitionists and the Politics of Violence. U of Pennsylvania P, 2020, p.87.