“A Declaration of Liberty by the Representatives of the Slave Population of the United States of America” was inspired by the Declaration of Independence. “Brown wove the text from the 1776 Declaration into his document, placing abolition as a central element of the Revolution’s unfinished work.” This “Declaration” also emphasizes the ideologies of the Radical Abolitionist Party [1]. 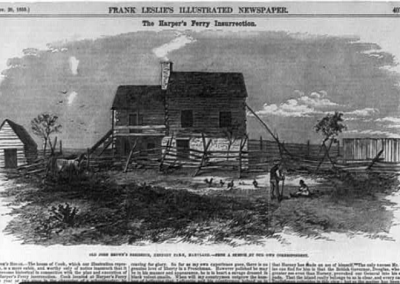 This document was found at the Kennedy Farm after the Harpers Ferry Raid. “The ‘Declaration of Liberty’ summoned the memory of 1776 in order to place Brown’s radical abolitionism in a tradition of patriotic dissent [and] validate his actions through historical precedent…” [2].

Included here are some excerpts of Brown’s “Declaration”.

“‘When in the course of human events, it becomes necessary for an oppressed People to Rise and assert their Natural Rights as Human Beings, as native and mutual citizens of a free Republic, and [break] that odious yoke of oppression which is so unjustly laid upon them by their fellow Countrymen, ‘and to assume among the powers of Earth the same equal privileges to which the Laws of nature and nature’s God entitle them, a moderate respect for the opinions of Mankind requires that they should declare the causes which incite them to this just and worthy action” [3].

The language and writing style of the “Declaration” recalls the “Address To The Slaves Of The United States” and its calls for “resistance, resistance, RESISTANCE!,” as well as its assertion that “no oppressed people have ever secured their liberty without resistance” [4].

Brown’s “Declaration” too claims that, as human beings, enslaved and oppressed people’s have a right, a natural and God-given right, to claim these rights, and that fighting for these rights is a “just and worthy action” [5].

Both the “Address” and the “Declaration” describe slavery as part of “the dark catalogue of this nation’s sins” [6].

In the “Declaration,” Brown wrote:

“The history of Slavery in the United States is a history of injustice and cruelties inflicted upon the slave in every conceivable way….It is the embodiment of all that is evil and ruinous to a Nation; and subversive of all Good” [7].

Both documents also attest to the damage that enslavers and those who support slavery have brought upon themselves by participating in it. Brown wrote:

“Our servants [including “Members of Congress and other servants of the People”], or Law makers are totally unworthy [of] the name of Half civilized men. All their National acts (which apply to Slavery) are false, to the words, spirit, and intention of the Constitution of the United States, and the Declaration of Independence” [8]. 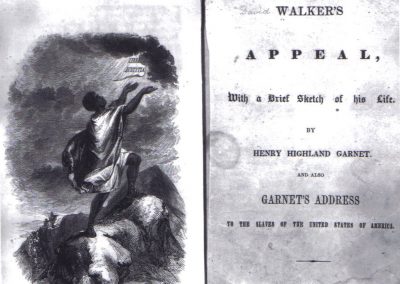 Walker’s “Appeal” and Garnet et. al.’s “Address” were published together in 1848. Image courtesy of massmoments.org.

When one compares these two documents, one cannot help but see the similarities in their calls for militant action against slavery, that such action is lawfully and spiritually justified, and that those who uphold slavery have brought ruin upon themselves.

It can be assumed that Brown may have had the 1843 “Address” in mind, not just the Declaration of Independence and the Constitution, when writing “A Declaration of Liberty By The Representatives of the Slave Population of the United States of America,” emphasizing the interconnections between Black radical activist networks and Brown.

[4] Garnet, Henry Highland. “An Address To The Slaves Of The United States,” Black Past, https://www.blackpast.org/african-american-history/1843-henry-highland-garnet-address-slaves-united-states/.

[6] Garnet “An Address To The Slaves Of The United States.”

[9] Garnet “An Address To The Slaves Of The United States.”