THE ADDRESS AND WALKER’S APPEAL 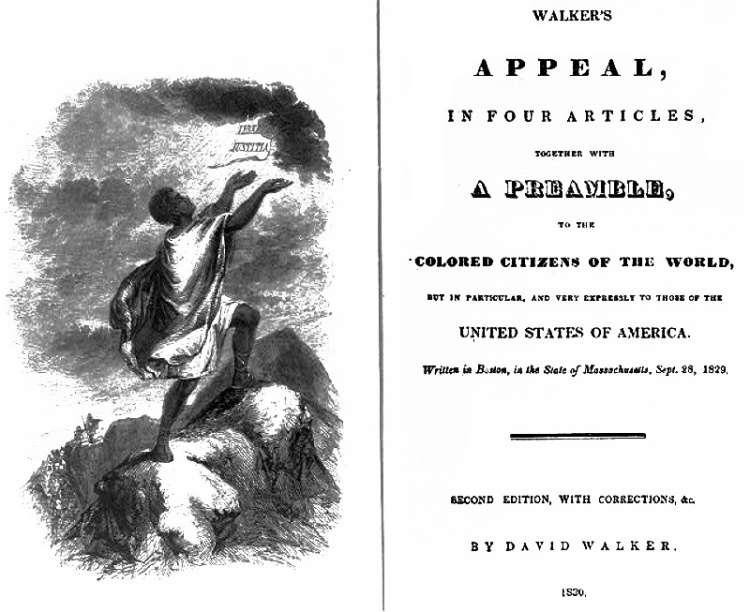 Title page of David Walker’s Appeal to the Colored Citizens of the World. 1st edition, 1830.

It is difficult to talk about Garnet’s “Address to the Slaves” without mentioning David Walker’s Appeal to the Colored Citizens of the World. After all, Garnet’s address first appeared in print form as a preface to the second edition of Walker’s Appeal.

Key Points of the Appeal

To understand the relationship between Walker’s Appeal and Garnet’s “Address,” it is important to outline some key tenets of Walker’s work, to which Garnet is deeply indebted. Walker called for the immediate abolition of slavery and argued for equal rights of Blacks. In doing so, in 1830, he put his life on the line. He wrote directly and passionately about the hypocrisy of Christian slaveholders, urged African Americans to violently oppose their oppressors as necessary, and denounced the racism evident in proposed “reforms” including plans to relocate free Blacks to a new colony in Africa. Playing on—and criticizing—enlightenment documents like the US constitution and the Declaration of the Rights of Man and Citizen, Walker’s Appeal is divided into four articles:

That we still adhere to the doctrine of urging the slave to leave immediately with his hoe on his shoulder, for a land of liberty, and would accordingly recommend that five hundred copies of Walker’s Appeal, and Henry H. Garnet’s Address to the Slaves, be obtained in the name of the Convention, and gratuitously circulated.

However, Garnet’s address is not indebted to Walker’s Appeal only for its printing. It also draws from many of Walker’s rhetorical strategies, pertaining to both content and typography. This exhibit seeks to elucidate the relationship between these two influential and radical abolitionist texts.

[1] Minutes and Address of the State Convention of the Colored Citizens of Ohio, in Foner and Walker Proceedings, 229.