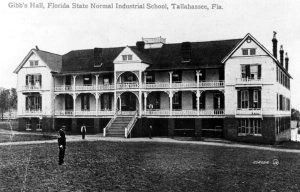 Although many Colored Conventions delegates were not born in Florida, many of them called the state home, especially in the Reconstruction and postbellum periods. Prior to the most visible Florida Colored Convention which took place February 5, 1884, African American political leaders of the state like Rev. Jonathan Clarkson Gibbs, James Dean L.L.B., Congressman Josiah T. Walls, Thomas Van Renssalaer Gibbs, Rev. Joseph Lee, and J. Willis Menard, engaged the conventions movement as delegates, like Rev. Gibbs, for many decades. While they did not always represent Florida as delegates, for men like Congressman Wells, James Dean, and Thomas V. Gibbs, their most important political work would be conducted as representatives of the state of Florida. Not only was this a formal political project for the delegates, these connections also trickled into familial relations as well. Thomas V. Gibbs in 1882, at the age of twenty-seven, married J. Willis Menard’s daughter, Alice, and by the 1884 Florida Colored Convention, they both helped to run the Florida News, which, based on a resolution offered during the convention, dubbed it “as the organ and the medium of the independent sentiment of the colored people of this State; and that we recommend it to the cordial support of our people in all sections of the State. “Florida and the Colored Conventions Movement” describes how the Colored Conventions Movement was a pivotal incubator for the development of Reconstruction-era Black Floridian politics.

By using Rev. Jonathan Clarkson Gibbs, James Dean L.L.B., Congressman Josiah T. Walls, Thomas Van Renssalaer Gibbs, and J. Willis Menard’s  political biographies, we will see how instructive the convention movement was to their political formations by mapping their various convention attendance alongside their political, educational, and military actions leading up to and after the 1884 Florida Colored Convention.

Simply because one did not attend a particular convention or a convention at all, did not mean they were not affected by the work of convention delegates. In Associated Biographies, learn how Julia Pennington Gibbs, Mifflin Wistar Gibbs, and Ida Alexander Gibbs were all connected to Florida’s Colored Convention activists.

Examine the institutional legacies of Florida Convention delegates and where today their it can be seen.